Kanji brought home the wine - Moet and Chandon champagne, and a red Chianti. AND six pink roses, for six years marriage. I cooked, and after we put the children to bed, we had our dinner, in the kitchen, but with a nice white tablecloth and the roses, it looked very pretty.

First course was minestrone soup with baguettes and cheddar. Yes, Italian soup with French bread and English cheese. The main course was steak, with lotus root chips and a camembert, baby leaf and pine nut salad. Dessert was apple crumble, which we forgot to eat, so that's on the menu for tonight!

During dinner, we tried to remember what we had done for our other five anniversaries. (After the annual debate about the date, which ends when one of us looks at our wedding rings). We could not remember even one! So after dinner we decided to look at the video cassettes, to figure it out. They go back to October 2000, so all five anniversaries should be there, we thought. But not ONE anniversary made it on to tape! One tape was broken, one missing, one year I was in NZ, on the others, the dates cuts from the 27th to early December. Nothing. Looks like this year was the first real celebration!

sigh, oh well. And this year we didn't tape it either - maybe it will become a tradition. We did take a photo though - but not until after we ate! We decided it will become a mystery for the future to figure out what we ate that night.
Posted by Rachel at 4:15 pm 1 comment:

Snow White and the Seven Dwarfs

Today we went to a play, put on by the Hikosen Masked Players, who wear huge puppet heads.
Posted by Rachel at 7:02 pm No comments: 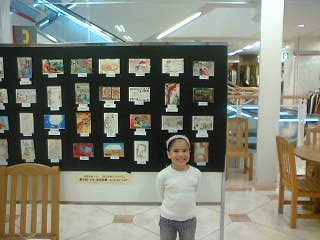 A few weeks ago instead of a normal art lesson, all the kid went to a local festival and drew pictures of things they saw there. Amy's pictures were very quickly drawn and got a bit damp, then when she got home, she drew this rabbit. 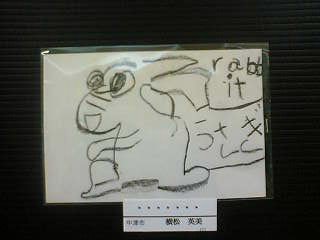 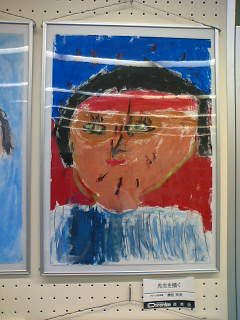 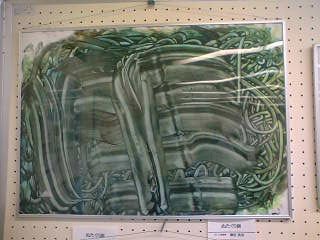 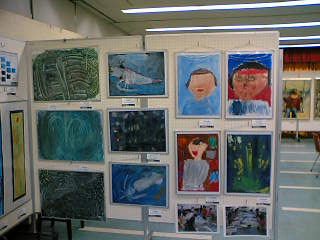 Also starting this weekend, was a more extensive exhibition of the work of all the art school's students. The picture below left is the work of Amy's group, the youngest group, with a few pre-schoolers, but mostly primary school kids. Amy's first picture is a finger/hand painting exercise, and the above picture her portrait of the teacher.
Posted by Rachel at 8:07 pm 1 comment: 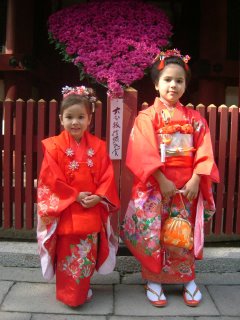 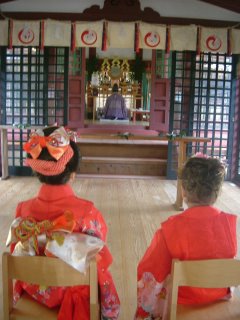 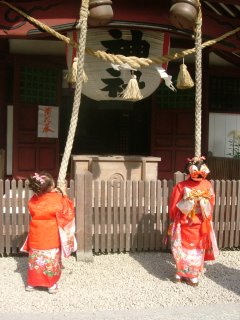 Shichi Go San means Seven Five Three in Japanese, and it's the name of a ceremony held for children in a Shinto shrine when they are seven, five and three years old. It's a thanksgiving and blessing, thanking the gods for their life and health so far, and asking for more. On this day, children of the appropriate ages get dressed in their kimonos to visit the shrine.

To the right, Amy and Lena are sitting in the hall of the shrine, while the priest does some rituals. They were very good, especially Amy, who was all over the place when she was three. Lena was a bit more restless - she kept turning around to tell me about the 'magic'. She thought it was a magic show, and she even clapped when it was over!

At the bottom, they are ringing the bells outside the hall, to call the attention of the gods. Actually they were just having fun, but that's what the bells are supposed to be used for!
Posted by Rachel at 9:05 pm 2 comments: 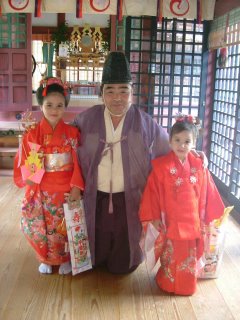 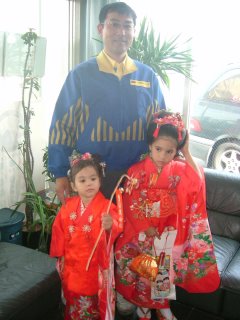 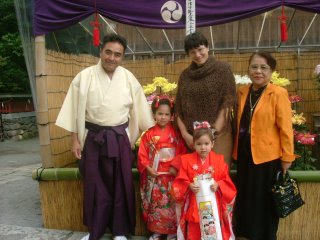 Directly after the ceremony, the girls now have their presents - a special '1000 years' candy, a twirly thingy (what ARE they called?),a cut-paper shrine object and a few more bits and pieces. November is also chrysanthemum season, the Japanese national flower, so the shrines are full of beautiful, huge blooms as well.

With us, and above in the shrine wearing the black hat, is my Again bar English student Mr Ikenaga, who is a priest at this shrine. I think Amy was a bit dumbfounded to hear him intone all the complicated ancient Japanese prayers, then turn around and speak to her in English!

Kanji couldn't make it due to work - so we hurried back to the gasoline stand so he and Jiichan could see them. By this time Amy was very tired - the sandals hurt her feet, and she found the obi (belt) very tight and uncomfortable. 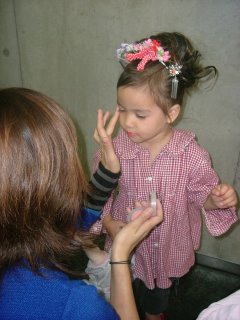 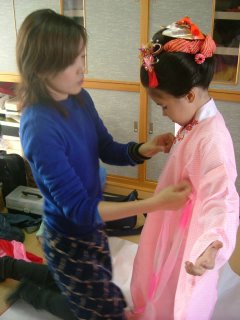 Getting ready - I think this was more fun than going to the shrine! They loved getting make-up on! Amy thought the curlers were the funniest thing she'd ever seen. Lena took some convincing to get her to sit in the chair to get her hair done, but once we showed her the pretty decorations she would get in her hair, she was happy. Gettting the kimono on also took time - you have to be careful to get everything in the right place and all nicely balanced, and the right length. 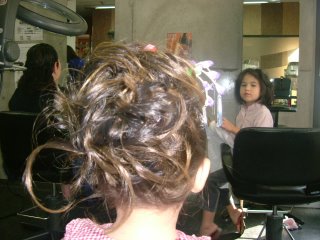 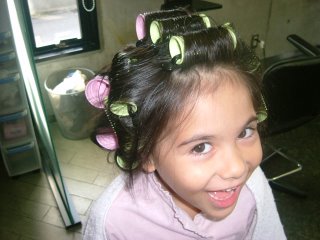 Posted by Rachel at 9:03 pm No comments: