Erica is growing fast! She holds her head up really well, even improving in the few days since Mum left. She likes to lie across my arm or leg on her tummy, gnawing away at whatever her mouth can find, and lifiting her head up to look around the room. She is starting to watch her sisters, and enjoyed watching them dance yesterday. She also likes to look at a painting Lena did, that has sat stuck to the side of the bookshelf for months, neglected and forgotten until Erica found it!

Amy and Lena have become expert cradle rockers. Amy can nearly pick her up, but I'm still a bit unsure about that! Their lives go on of course. Amy had her first field trip last week and Lena had a sports day where she aced the relay -the girl can fly! She is also doing very well with ballet - she is Little Red Riding Hood in the concert, and it sounds like she's getting her steps down very well.

I am managing to get the laundry done! I will go hang some now, but it looks like rain today so it will have to hang on the kitchen window. Typical, Erica wet her bed today! The typhoon passed over, and, alas, didn't ground Grandma and force her to stay in Japan for another week. Now it looks like we have a cold snap coming over, and I need to go bundle up. On the bright side, it is finally cool enough for me to take out some of the beautiful woollens Mum brought for Erica. She will wear a cardigan today!

The bad news is that I have a blocked duct. I think a combination of lying on it to read, then Erica falling alseep after feeding off the other side and it getting engorged caused it. So that's two reasons why Mum's post won't be going today - the other being the fact that our scales died, so I can't be sure of the weight, and the weight is important because there are special discounts avaialble for up-to-1kg and up-to-2kg packages, so I have to be careful to get them exactly one or two kgs!

Erica is sleeping right now, so I'm going to get a cup of tea and have a rest and a sleep and nurse this breast, and hope it doesn't develop into mastitis.
Posted by Rachel at 9:52 am No comments:

Halloween and no Grandma

Well Grandma left yesterday morning, a very sad day and we all miss her terribly! Poor Amy had a dream that she was gone - then woke up and it was true! Erica did not smile at anyone, and Lena was very sad. I was sad too of course, and we're all counting down until we return to NZ in August next year.

Erica slept most of the day yesterday, although she had a hard time settling in the evening, leaving me walking up and down for about 2 hours until she finally settled at about 10pm. Today she had her unsettled period over lunchtime, while I was hosting a party!

Yes, mad though it may seem, I decided to have a Halloween party! I made a pumpkin pie on Friday, so Mum could try it. I roasted pumpkin (or more acurately, butternut squash) yesterday for the pasta, and started tidying yesterday morning. The girls took care of the decorations. I even got a load of laundry out this morning!

Maia and Emily and Masaki and their Mums came, bringing muffins and drinks and bread rolls to add to our feast. We played 'trick or treat' with Maia's Mum taking care of the front door, Joanne being house No.2 at the living room door and me being house No.3 in the kitchen. Then they just played outside while we talked, I didn't have time to arrange any elaborate games or activities.

Tonight I think we'll have take-aways, and then get to bed early. Erica slept for six hours at night on Thursday and Friday nights, but woke twice again last night. On Friday we took her for her one-month check-up. She's now 5kg, well above average for her age! Big in every direction!
Posted by Rachel at 3:12 pm No comments: 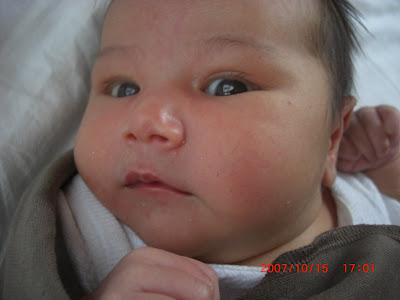 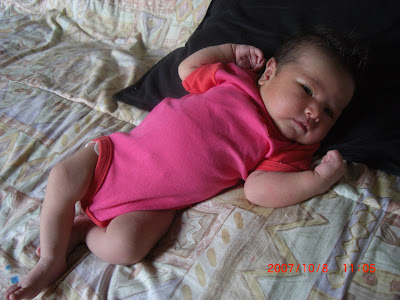 Yes, our baby is smiling at us! A few days ago, that big-mouth type, the day before yesterday, a wide one, and today, after an unmistakeable grin when I picked her up and talked to her after changing her clothes, she smiled at us several times. Of course, now the challenge is to either video or photograph the little miracle, and what's the bet she thwarts us!

We had her weighed the other day, she's around 4.4kg, and seems to have grown 2cm since birth. She'll be in kindy in no time! Here are some photos
Posted by Rachel at 10:34 am No comments:

For obvious reasons I've been rather too busy to keep this updated!

She will wake up any moment so if this post is unexpectedly cut short, you'll know why. In the meantime I'll try to provide a brief update.

She was born, as expected, on September 27. I went from the blog to resting on the sofa with Kanji, and we left for the clinic around 1am. She was born at 2:35am, after a fairly mild labour and a very quick delivery - in fact the nurses held her in so the doctor could get there on time. I didn't like that and fought it, though I tried to hold off pushing a bit when the doctor came. I held myself off the reclined birth chair-bed to push in a more upright position, and I avoided an episiotomy and tearing too!

She was bathed with he Daddy and Grandma watching, and after that she was with me pretty much 24/7 except for her morning baths on the first two days, and a temperature check in the afternoon. I cuddled up with her in bed for hours after the birth, dozing and letting her suckle. She was cold after the bath and they gave me a warm mat to put her on, like a mini electric mattress, which I had in bed beside me, so I could keep her close for body warmth, the most effective way to warm up a wee baby.

The clinic stay was rather long, and fairly relaxing, although the amount of mother and baby health checks all day long prevented me and her from getting any sleep! The meals were superb, and the best thing was my friend Maki gave birth the same day, so I had someone to chat to and ask questions! We came home on the following Tuesday.

I developed a cracked nipple, and decided to use a nipple shield, which did me further damage. After trying to go bare again and suffering excruciating pain, I tried a pump to give it a rest. That worked, although I wish I'd just persisted with the nipple and not tried the shield in the first place! As of yesterday we are back to nature, no extras, which is such a relief, as I seem to have so many more hours in the day when I am not pumping, washing, disinfecting and warming bottles! Time to blog, for example!

She's now two weeks old, and a treasure. She is quiet and contented, and only really lets rip while I am getting her dressed after her bath. She sleeps well at night, wakes around 1 or 2 and again around 3-4, and then sleeps until about 7. She fed all day yesterday, but that doesn't bother me as much as it did with Amy! I know better than to have any expectations of a newborn. And I know that in about five minutes she'll be walking, and tomorrow she'll be starting kindy....so I get as many cuddles of my newborn as I can while she'll still this tiny, floppy, velvetly soft, milky-smelling and endlessly cuddle-able creature!
Posted by Rachel at 12:53 pm No comments: