Lena woke up with a fever yesterday - finally her turn, although she held out for long enough! I took her to the public hospital, since the pediatrician's was closed on a Sunday. They had said to bring her as soon as she got a fever, because Tamiful works best if you take it as soon as they get a fever. I hate the miscommunication at the hospital between the doorman/receptionists (who work on weekends and holidays), who are city council workers, and the actual doctors. The doormen/receptionists, when we rang, told us to come, but when we got there, the doctor said that she would probably not test positive yet, even if she had the flu, if her fever only just came this morning. Sigh. Sure enough, the test was negative, and we went home with nothing, and $60 wasted (we will get some money back on Tuesday though)

She sank throughout the day, and we hauled her back on today, which was a public holiday, so we had to go back to the public hospital again. This time her test was positive and she got her medicine. Once they decided that we might indeed have the flu, they put us in isolation in an unused room, which was funny because there was no-one in the pediatric waiting room anyway, but rules are rules obviously. The good thing was that the doorman/receptionist must have felt sorry for us, so didn't charge another $60.

Wanna know about the tests? Usually it's a long cotton bud up the nose, which is what I got when I took Tamiflu for the flu last year (ministry rules - you can't give it out until you get a positive test). It's what Amy got at the pediatrician's, and what Lena got on Monday, but on Sunday, they strapped her down and sucked the snot out with a machine. Charming. Luckily she was feeling all special and privileged because she was sick, and the doctor was looking at her (usually she gets sidelined while Amy gets all the attention) plus I told her she looked like a Christmas present, so she was giggling when they started. She held up fine - her eyes watered, but she proudly told me that althogh it looked like she was crying, she really wasn't.
Posted by Rachel at 2:20 pm No comments:

Well me and Lena are still fine and dandy. Amy feels better today - I know because she's starting to whinge. You know when a kid is really sick because they go totally quiet. She even came into the kitchen while Kanji and I ate lunch to get a bit of attention she felt she was missing out on.

Lena discovered the iPod today. She was watching me as I adjusted the volume for her, and took over, doing it herself. Then I clipped it onto her pocket, and she was off, walking slowly with a big grin on her face, or stopping to listen. She's been so bored these last few days, but at least she is better at playing by herself than she used to be. She plays elaborate imaginary games with animals and little figurines, or sings constant unending songs that are as much a key to her psyche as Amy's pictures are to hers.

Meanwhile I went to work in the freezing cold - it even snowed a bit today. We had the school tour today, where we get our students to take us around the school to the other rooms where they learn things like machinery, design and computing and electronics. And in the afternoon, I taught Yoshida Shu, who, if you remember, was my first boss in Japan. He quit, I continued the lessons independently. He went away, came back, worked at another juku, and is now delivering newspapers. He wants to go to NZ, so he wants to study English more. He's a bit weird, but okay, so I decided to do it. It's at a cafe, so I get a free coffee.
Posted by Rachel at 10:48 am No comments:

It's been a long time since I wrote, for several reasons - my camera broke getting pictures from the phone from the email program into the files and then onto here took so long I kept putting it off. Then somehow my photo-upload software started to malfunction. Then I did an update and the new Explorer security settings chucked out the cookie and I can't get it set to take it again, so I am using Mozilla Firefox now. Blah, blah, blah, anyway here I am.

Amy has the flu, Kanji had it yesterday. Me and Lena have stronger immune systems it seems, this happened last time and we both got it, less severely, a few days after them. So I am expecting to feel pretty crappy tomorrow! I have warned work that I might not turn up, and I will probably have to cancel a few other classes too. In anticipation, I have cooked a big pot of vegetable soup, prepared a nabe stew, simmered some fish tails, and put two cups of rice in the rice cooker. I was in the kitchen from 12 to 4, and when I finished I announced to Kanji, "There, now I can get sick!"

Amy and Kanji are taking Tamiflu, which is handed out for the flu here. It's not an instant cure-all, but weakens it and you get over it faster. Kanji's pretty much alright now. Amy has to go back to the doctor's on Saturday morning, and I have instructions to take Lena as soon as she gets a fever. I am worried about Amy's asthma developing from this, but she is taking a preventive medicine at the moment, so she should be okay. Flixotide, or Furutaido as it is know here, weakens the immune system, so Amy always gets everything that's going around, and gets it bad. I have Lena to remind me how a normal child gets sick! I wonder why they are so different. Was it the smoking around her as a baby and when I was pregnant? Was it the bottle I introduced, did that start her off on the run of infections she had as a baby that required antibiotics? Who knows.
Posted by Rachel at 5:02 pm No comments: 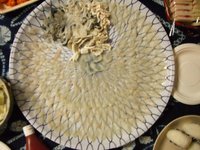 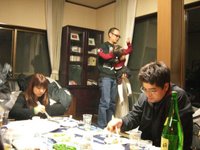 We went to a New Year's Eve party at the Egamis, in what is becoming an annual event. We ate Fugu, poisonous puffer-fish, and Hokkaido snow crab. The fugu sashimi is on the far left; In the corner is the lining of the skin - the skin itself is poisonous, so you had better hope your sashimi-slicer was concentrating! On the right, Yukko and Nogami are tucking in while Osamu plays with Lena.
Posted by Rachel at 9:02 pm No comments: