I certainly hope I'll get some time to update the last week, although if you've read this blog from the beginning you'll probably be thinking "Yeah, right, I've read that before!"

We had a very, very, slow and lazy day at home today. So slow and lazy that only one of my three modest goals was met - cleaning up the living room and installing the kotatsu set. Goals 2 and 3, to do laundry and make something with the turkey just did not get done. So... all that's put off till tomorrow, and now it's already nearly 7 and I will soon order some pizza, because I have a headache and need to sleep soon.

For a quick update for reference:

22nd: Amy's class Christmas Party at home, for which I cooked hot dogs, sausage rolls, onigiri (actually Lena made that), and sandwiches, mini quiches and a Yule Log.

23rd: AFWJ Holiday Madness and Mayhem family party at Michelle's in Kitakyushu, for which I made mashed potato, mini quiches and a Yule Log.

25th: ham and eggs for lunch, turkey with roast potato, kumara and pumpkin, mashed potato, cauliflower with cheese sauce, cabbage and peas, then trifle and pavlova for dessert after we went to see the fireworks

26th: Boxing Day relax and leftovers party in Beppu, I bought Chinese and made yet another Yule Log.

1. What did you do in 2012 that you’d never done before?
Saw lightning hit the ground. First in the graveyard next to my house. Then in my living room.
2. Did you keep your new years’ resolutions, and will you make more for next year?
Ha bloody ha. I even bought shoes to run in - NEVER used!!!
3. Did anyone close to you give birth?
YAY Welcome to the world Izzy! Cutest first great-niece I could ever wish for. I can't say the neighborhood white stray was exactly close to me, though her three little offspring certainly became so - welcome Genki, Cinnamon and Vanilla.
4. Did anyone close to you die?
In the last two days two women died who I have never met, but who touched my life in different ways. A former President of AFWJ, and a woman I worked with last year as she submitted columns to the AFWJ Journal I was editing last year. Both dynamic, intelligent, well-loved women and I, as current President, am charged with the responsibility of sending flowers and letters to their bereaved families.
Then just today, I heard the very sad news that my friend's Mum died. We hung out at her place a lot during high school, so I know her very well. And she loved mowing lawns and would come and mow the lawns at our flat when we were flatting together at Uni. I knew she was ill, but it's still so sad, and coming so close to Christmas.
5. What countries did you visit?
None...
6. What would you like to have in 2013 that you lacked in 2012?
100% decluttered house. And an extra day each week.
7. What date from 2012 will remain etched upon your memory, and why?
July 19, the day the lightning hit the house
8. What was your biggest achievement of the year?
Producing the AFWJ calendar.
9. What was your biggest failure?
Savings.
10. Did you suffer illness or injury?
Strained my wrist bathing kittens. Left knee painful, so that I have to come downstairs in the morning one stair at a time. Feet can no longer endure heels - this is horror to me!!! Hello to flats....
11. What was the best thing you bought?
A new iMac!
12. Whose behavior merited celebration?
How awful that I can't think of anyone! My lovely children - Amy for playing piano at a school event, Lena for getting her summer craft into the city display, Erica for the best turtle ever at the kindy concert. All of them for being good kids who help and actually want to please me and write me with sweetest cards for birthday, Mother's Day and Christmas. My husband for putting up with me. Okay now I'm starting to sound like a cross between a Hallmark card and an Oscar speech, so that will do!
13. Whose behavior made you appalled and depressed?
Every person in the US who still thinks it's a good idea for everyone to go around with guns. Anyone who still thinks nuclear power is a good idea in a tectonic zone.
14. Where did most of your money go?
Food, extra-curricular activities and social events
15. What did you get really, really, really excited about?
Mum coming to Japan! And associated travel: the two days at Huis ten Bosch, the three at Shonenji and three in Kyoto.
16. What song will always remind you of 2010?
Angela Aki's Tegami, since I got to see it live (and meet her after)
17. Compared to this time last year, are you:
i. happier or sadder?
more conflicted
ii. thinner or fatter?
I think I'm fatter actually, but I stopped weighing... actually that pretty much means I'm fatter, right?
iii. richer or poorer?
same
18. What do you wish you’d done more of?
cleaning, believe it or not
19. What do you wish you’d done less of?
following links on facebook all morning
20. How will you be spending Christmas?
JUST the family this year
22. Did you fall in love in 2012?
Yeah... with Kanji.. again...sigh...
23. How many one-night stands?
I think this question should be retired.
24. What was your favorite TV program?
Oh boy I HATE you Peirs Morgan cos I swore I hated you but dammit I like your show!
25. Do you hate anyone now that you didn’t hate this time last year?
Abe.  Foolish dick.
26. What was the best book you read?
Blackout and All Clear
27. What was your greatest musical discovery?
Duran Duran. Apologies all round, I have some serious music nostalgia going on here due to reading the memoirs of John and Andy.
28. What did you want and get?
New tatami and fusuma and shoji. A new computer. Not quite how I was expecting to get it, but....
29. What did you want and not get?
See No.6. Sigh...
30. What were your favorite films of this year?
I haven't seen it yet but I'm going to say The Hobbit anyway
31. What did you do on your birthday, and how old were you?
41. I had the BEST party!! We invited our bestest oldest Nakatsu friends. EVERYONE of them brought a bottle of wine, they all know what I love! I spent the night opening and sharing bottles and chatting and having the best time!!
32. What one thing would have made your year immeasurably more satisfying?
Some International travel

33. How would you describe your personal fashion concept in 2010?
sigh. elastic waists. double sigh.
34. What kept you sane?
Wine and facebook, long hot baths, computer games and magazines on the ipad curled up in bed, listening to my children breathe.
35. Which celebrity/public figure did you fancy the most?
Naveen Andrews again for some ungodly known reason. You know, apart from him being rather sexy that is, I mean, why now?? Haven't watched anything with him in it lately, OH that's right, I had a dream.
36. What political issue stirred you the most?
Guns and nuclear power. Just piss off, both of you!
37. Who did you miss?
Mum!!!
38. Who was the best new person you met?
The new staff at work, we got some gems this year! And the K-A International Mothers!
39. Tell us a valuable life lesson you learned in 2012.
This is it, babe, this is it.
40. Quote a song lyric that sums up your year:
"My girl wants to party all the time, party all the time, party all the tiiimee"

Which reads 'Christmas Kai (party)', with the girls from Amy's class.

I don't know how she talked me into this... no, actually I do. She flattered me. Told me that when she told her friends about my fantastic parties they all started clamouring to go! So she wanted to show them one of my fabulous parties. Well, what's a hostess with the mostess supposed to do? I agreed, but the only clear date was the 22nd, right on the cusp of the silly season.

Never mind, I thought, it was not actually one of my parties, so the cooking would be toned down, and I would not be drinking, and most importantly would be not obliged to entertain, meaning I could use the down time after the meal was served to catch up on some work. I would also be in a better position to insist that Amy help me clean up!

Being all hung-ho about her party, Amy was 100% front and centre with the preparation - HER friends were coming over and she wanted it to be clean and tidy! I got home from work on Friday night and we finalized the menu and went shopping. She was a little tired and reluctant, but I pushed it, reminding her it was HER party and we would be too busy in the morning. Trips to 3 out of my usual 4 supermarket visits followed, and I tried to stick to the budget - 14 guests each bringing 500yen (I was certainly not going to finance the whole party!), minus some for drinks which the girls were going to buy, because Amy told them that I always forget to buy soft drinks (it's true, I do).

Saturday morning, we worked hard to get everything prepared. The kids started arriving before we finished, but that was fine. They counted money, divided jobs (sending some kids off to buy those drinks) and generally sorted themselves out. We weren't ready to start until after 2pm I think.

They were so cute... they had organized it just like a grown-ups event, with an official start, welcome and opening words, and kampai (toast - but in Japan it's done only once and signifies the start of food and drinks, you're not supposed to drink before that). They had a written schedule and had nominated this or that girl for each job. They even had crackers and a bingo game written into the schedule. 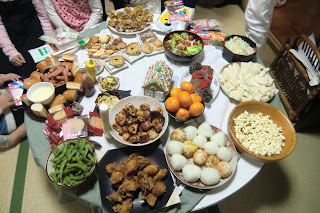 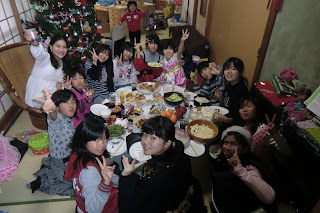 It was a lot of work, but worth it!