I think winter finally found us. We had a few fluffs of snow yesterday, nothing on the ground, just a reminder in the air that it really is cold out there!

Here's bubs all rugged up. Isn't she getting big? 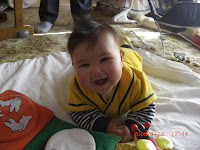 Erica is definitely teething! Her cheeks are bright red. That little white spot on her gum is getting bigger and whiter. Mum, I was right! Remember when she was just a few days old and she was crying with a big open mouth like they do and I said, Hey isn't that a tooth? Well I think I was right, her teeth are not far under her gums, showing up as white spots. And here she is, teething much too early - she can't even hold on to her teether properly, I have to sit there and hold it for her while she frantically gnaws on it.

She is also sitting up, leaning forward. And she laughed out loud again yesterday, with indefatigable Amy playing peek-a-boo. She was aniticipating Amy's reappearance, and looking around for her over my shoulder, then Amy would pop up and she'd get just enough of a fright to make a noise, mostly a 'gnnnhhaa' or a nose-blowing noise she's taken to making lately, but then just that once, a real laugh. And then she giggled in her sleep not long after which the girls found so endearing - clearly dreaming about her fun time with her big sisters before bedtime (not that she went to bed, oh no, she took a short nap, then stared up at me with her big eyes until I looked at her, whereupon she grinned from ear to ear and cooed. She stayed awake until her Daddy got home, then some...finally nodding off at around 11:30 again)

Both girls had a parent observation day yesterday.

Lena's was all morning, from 9:15 and scheduled to run until 12:00, but it didn't finish until 12:45 due to some last minute prep and practice for the mothers' performance at the kindy concert. I like going to see what she does at kindy, but really, do they think we have nothing better to do for THREE HOURS? Especially when they didn't do anything that they do on normal days. We played a game together in the hall, a human board game which was fun and really well done. 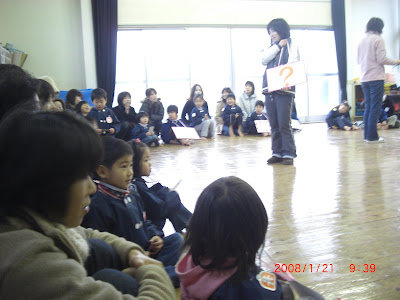 The kids, acting as board squares, sitting in a circle as the teachers explain the rules 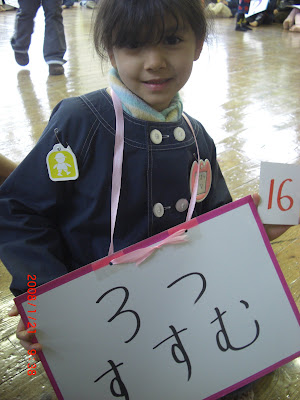 Lena was the 'Take 3 Steps Forward' square
Then they had a bunch of traditional and New Year toys set up in the other rooms and the kids took their parents to play with spinning tops, cat's cradle, cards, and 'kendama', and kind of cup and ball. 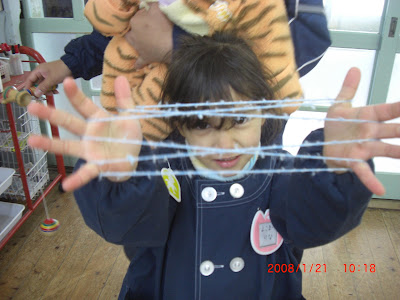 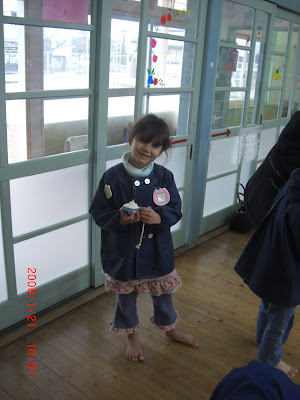 Then we had a class meeting with the teacher, in which she spoke in vague terms about the behaviour of the kids, what they have gotten good at (taking turns, sharing, chores etc) and what still needed work, including how some of the girls (Lena and her crew) fussed too much about whether their hair and clothes were labelled 'kawaii' (cute) by their friends or not. Then each mother in turn (and Kanji, the only Daddy) spoke about her concerns or things she thought were working. Japanese people often won't speak up unless everyone has a go in turn! Kanji talked about our worries that Lena wasn't adjusting to kindy the easy way Amy had, and that we were worried that she couldn't speak as well as Amy. The other mothers thought it was great that she could speak English as well, as that it would be to her benefit later. That was nice to hear. And also enlightening to hear the other mothers of Lena's best friend/nemeses that it was much the same for them - their girls also come home complaining that so-and-so said she liked/didn't like me today. So it looks like it really is just silly little girls with no social skills. It hurts her so much though.

Amy's was next, after we went home for a quick lunch. Erica was wonderful through all this, didn't cry once. I fed her once in the hall, and walked her to sleep during the meeting. First, she looked at the pictures on the wall and cooed at them, which was super-cute, if a bit noisy, but at least she wasn't crying. She dropped off to sleep again during Amy's class. I wanted to as well, or at least to sit down, it's a hard slog carrying that heavy baby! In her class, we watched as they first read aloud, then examined a story. Lots of independent thinking going on, but I kind of lost track, as I couldn't hear what the kids were saying very well. It was a mystery story about Who Broke the Vase? 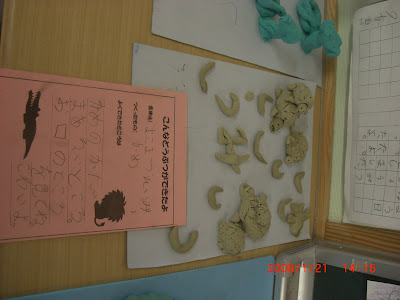 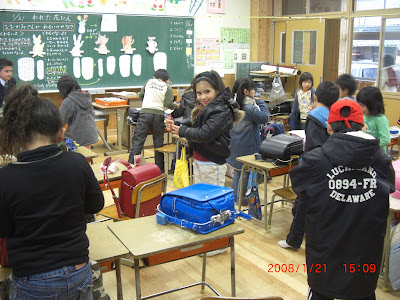 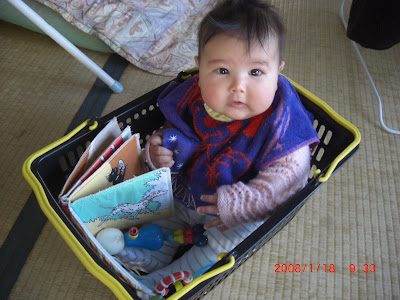 Say no more!
In other baby news, Erica appears to be getting a tooth. Dribbling, gnawing, an extra feed added overnight, fussy feeding. A small white bud visible on her bottom gum on the rare occasions I can see into her mouth, and I can feel it too. It's not red or swollen so I don't think she can feel it. Aapart from her increased need to suck and gnaw, she's pretty contented.

She definitely left-handed. The first of six children and eleven grandchildren of two left-handers! She is learning to grasp deliberately, and consistently chooses her left hand to practice. She holds up her hand, looks at it with her cross-eyed baby look, and deliberately aims it towards...usually my nose.

Amy has finished Little Red Riding Hood and now her and her friends are making up dances to songs. It puts a spring in her step on the way to school. Lena declared her day at kindy yesterday to be 'perfect', so it looks like the efforts the teachers are making are paying off. Kanji's friend suggested we change schools, but I'm not ready to go that far yet. Only two more months and she starts school. There will be new kids, and new classroom lists so the dynamics will change. I don't think the bullying children are being deliberately mean at this point, just stupid.
Posted by Rachel at 10:05 am No comments:

The ones at school I mean, for insisting to Amy that Santa is your mother. She demanded I tell her the truth yesterday. I evaded the question - "What do you think? What do you want to belive?" and "Maybe they don't know because they are Japanese, and Santa is a European, a NZ, a Christian thing and they don't know anything about it". Hopefully the whole question will just fade away and they will be talking of other things today. She has her second influnza shot today, I would take the opportunity to talk to her about not letting her younger sister hear nasty rumours about Santa's reality, but I think I'll get her Daddy to take her, since I don't want Erica in a germy public hospital pediatric clinic if I can help it.

Erica is having fun kissing everyone! She left a mark on Amy's cheek! On the downside, she is not sleeping well at night. You know when you are tired when you blink and your eyes don't open again. Mums and night workers know the feeling, and we have plenty of both in our family so they are many of you who know what I mean.

She naps in the evening at the right time to enable me to spend some valuable time with her big sisters at bedtime, reading. This is so important right now, as Amy has just caught on, and is reading Roald Dahl's "Magic Finger" and a Little Red Riding Hood Ladybird Book. We discovered we have seven Little Red Riding Hood stories at home, eight if you cound Lena's dance for her ballet concert - as well as the Ladybird book, I have a book of original Grimm's stories, a beautifully illustrated fairytales book I had bought previously, a small travel-size compendium of nursery rhymes, songs, poems and stories with it, a Japanese translation of the Grimm story, the Mell doll book that came with the clothes set that Lena got for Chrismtas, and a tiny mention of the story in another book, which I claim as my favorite because it distilled the story down to two images and two lines: Before the Wolf, (grandma in bed) and After the Wolf (grandma tied up under the bed, Wolf waiting in the bed).

(She just came home from school absolutely full of a grand scheme she has devised - she has promised to make her friend a hood for a play of Little Red Riding Hood she is producing with her buddies. Clearly there has been no more talk of Santa today, phew!)

Meanwhile Lena is continuing to get bullied at kindy. We wrote a note to the teacher, and they said they taught the whole class what kind of things they should and shouldn't say and do to other kids, which seems to have worked, as she reported a 'wonderful' day today, and she played with Maya, who is otherwise the ringleader. Maya seems to be a fair weather friend only. (This is not the Maia who Lena went to English kindy with)

Meanwhile little Erica wakes again just as her sisters go to sleep, all bouncing and smiling and ready to play! She doesn't go to sleep until between 11-12, then wakes again for a snack at 2 or 3, and my alarm goes off at 6am. It's starting to catch up to me! But I always have the option of napping with Erica in the morning after the older girls go to school. I slept from 8am til 11:20am on Tuesday!
Posted by Rachel at 2:36 pm No comments:

Catching Up After the Holidays

Two more days of winter holidays left. Amy is back to school, Lena to kindy on Tuesday. Amy still hasn't finished her winter holiday homework, I still haven't got over the fact that they gave her so much homework! Lena is a ninja. A REAL ninja, and don't you try to tell her she's not! Erica is a little, round, soft, cuddly, sweet-smelling ball of a baby. She laughed out loud for the first time - watching her sister, who shall remain nameless, on the toilet. She likes hand plays (Clap hands for Daddy to come, Inky pinky ponky,) dancing, raspberries on her tummy, sliding down my knees in the bath and as always, that activity gym! Her hands have come into play, and just in the last few days, her mouth! For a few happy days I could give her interesting things to touch, knowing she would just crunch them in her fist, but now everything is straight to the mouth! She makes the most darling 'sucky mouth' as she brings her hands together to gather up the doll, or chocolate bag (the mini-Crunchie bag is a hot favorite) or Lena's clothes (she LOVES Lena's clothes. Lena loves her clothes, so she always agonizes over her choices, and ends up with something pretty, whereas Amy just puts on the first thing she reaches for, something comfortable) or occasionally an actual baby toy.

Today I'm making golden soup for my lunches this week and meusli for my breakfasts. Amy is supposed to be doing her homework, and Lena helping me with getting the books upstairs. I'm putting all the books up into the upstairs tatami room, to be known henceforward as The Library, or perhaps The Dressing Room, since the clothes are in there too. It will retain a bed, just in case. Then I can shift the two desks downstairs into the Study, where my computer and the piano are.
Posted by Rachel at 10:51 am 1 comment: