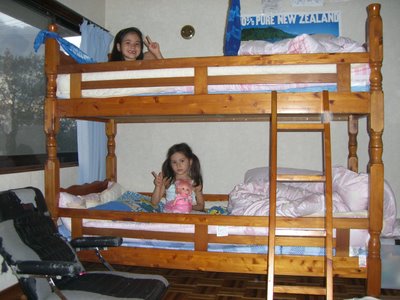 I got them! Kanji and I went in the van and picked up the nice bunks I found in the second-hand store, quite by fluke. When we started to load it into the car, we realized it had quite a strong moldy smell, but it was a very light surface of dust rather than actual mold. I had planned to get it set up in time for the kids to get home from kindy, but we had no time, I had to leave it in the van. Kanji took Lena to kindy this morning, and I thought she would have no idea what it was, and would easily believe him when he said it was something for the Stand, but he said she saw it an immediately said ‘Is that a bunk?’. So she spent an exciting day at kindy waiting to get home to the new bunk!

I picked up Amy and told her I had a surprise for her – and we went to the Stand and peered into the van and she also twigged right away. We took the pieces out of the van at the Stand to wash them, then we worked out how it fit together. Then I loaded up the kids in the van and off home we went, where I got it upstairs and put together in about half an hour! We were getting pretty excited by then, but our work was not yet done – next stop was the stores to get mattresses, new quilts and bottom sheets, so as to make a nice, crisp new bed top and bottom.
That night the kids were itching to get into bed! It was very exciting for them, although Lena was still a bit anxious. At one stage last week she had decided that she didn’t actually want a bunk after all, when she learned that she had to sleep in it alone. But I had to work tonight, so Papa did the honors, and snuggled up beside her.
Posted by Rachel at 9:34 pm