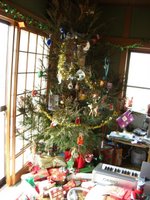 Christmas Day began of course with Santa, thankfully at a reasonable hour due to two consecutive late nights! The downside was that Daddy was long gone to work by the time Amy and Lena realized Santa had been. As Mummy was unable to find the Santa sacks the night before (the are still AWOL) the girls had to use rather messed old felt stockings, but they didn't care. Each one contained a packet of three Disney Princess eggs with a figurine inside, and three animal finger puppets. They each had three more presents that just would not fit in the tiny stocking!

Amy got a Doctor set, a Pokemon painting and stencil set, and an Alice in Wonderland pop-up book. I say 'pop-up book' but this book is amazing! I will post some photos sometimes to show you! Lena got a baby doll who she has called Molly, who cried and laughs and calls out 'Mama', a Polly Pocket doll and a Jungle Book pop-up book.

Then we came downstairs just in time for Daddy to come home for a few minutes, so we took the opportunity to open Mum and Dad's present to Amy and Lena - a doll's house. 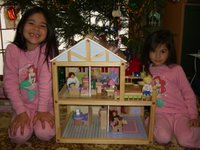 We had cocoa pops then ham and eggs for breakfast, then I took some time to open my present from me - an order from ezibuy's sale! The shoes are to-die-for! I also bought a bra, a skirt, two tops, a sweater, and two cover-up tops for the beach in summer, which is months away! but that's what you get for shopping on the other side of the world!

The morning was spent cooking of course. Kanji wasn't sure if he was able to get home, but two of my co-workers (who are also Lena's kindy teachers) we able to come for lunch. I roasted a lamb loin, and cooked a mountain of roast potatoes, pumpkin, sweet potato, peas, cabbage, and cauliflower and broccoli with cheese sauce. Miss A brought chicken, a Japanese Christmas tradition, and Miss T brought a Japanese Christmas cake (white sponge with strawberries and cream), which was good because I had no time to make dessert! I had a pavlova that looked like a burnt marshmallow and had to forgot to get the cake for a trifle. I briefly considered going shopping, but lack of time and a reluctance to expose myself to the depressing lack of Christmassy-ness on Christmas Day convinced me to stay home. 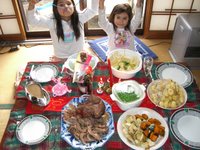 Kanji made it home in time, in fact, we ate and had our champagne toast before the others arrived, and Kanji headed off to bed, as he has a rather bad cold and had held up bravely all morning, both working and trying hard to be Christmassy for me, and he had had it! Miss T was driving, Miss A had to go back to work, and I was starting to feel a little under the weather so it was a rather quiet Christmas dinner. Miss A went back to the office, complaining that the bosses solution to the light work-load today was not to give the foreign staff the day off, but to make them clean. Unfortunately any strike action was thwarted by the Japanese staff, who were putting in 110% as usual. I felt glad indeed that I only work part-time and I am not required to be at the office when I don't have a class. 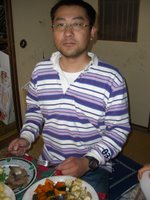 After lunch and just before the teachers arrived, we opened more presents! I got a new mixer from Kanji, plus a teddy bear. Okay, so they threw that in on points on his point card, but still. From Mum a beaded angel and two beaded balls for my Christmas Tree. Rebecca also got me a Christmas decoration - a little articulated Santa. Nice timing, since I decided this year to start getting nice decorations, and slowly get rid of the junk. I also sent everyone a decoration this year! Chocolates from Maria, Chris and Mum - I am going to get so fat! But I will enjoy every minute of it. The Continentals can wait til last, but we opened the Favorites straight away, so Amy could get the Crunchies, which she loves (hint hint). Kanji was thrilled with his puzzle, which he said he loves - he also solved it in less than a minute. I am still working on it.

Amy got a Doodle Teddy from the cousins, which she has already decorated and thrown in the wash! And Lena got a set of miniature ponies which she loved - they are now in the Dolls' House living room. Aunty Becky also sent them a present - silly putty for Amy, which they fought over, and some groovy magnet-foot dolls which have joined the crowd on the fridge. Miss T brought them some hair accessories. The kids got chocolate and sweets from Keio, and I got a bag. I think that's it! 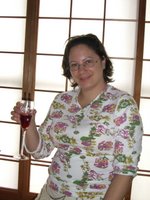 Lunch leaked into dinner, and the kids had curry, while I nibbled on chocolate. We watched Polar Express, then old Christmas home videos from 2000 when Amy was a baby, then 2002 when Lena was a baby. Amy whinged about having her own room, just so she would have somewhere to put her dolls' house. She is still in tow minds about actually sleeping there though. Well, I will get her that desk over the New Year holiday and get started.

Miss T left, and the kids went to bed around 9pm. I ran out of steam, but forced myself back out of bed to open some of the books I bought and had delivered. In the end I only opened one, and was out to it again by about midnight.

I missed my trifle and pav, but I am so overloaded with chocolate I don't think that will matter! I still have a mountain of potatoes and a huge chunk of lamb - I will have to think of some creative recipes for them.
Posted by Rachel at 9:48 am