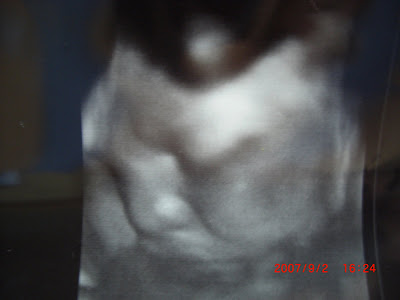 Above: Baby's face. I know people find it a bit hard to see at first, but once you can see it, it really pops out at you! The whitest part is her forehead above her left eye. The eyes are closed, the dark curve beneath the whitest part is her closed left eye. You can see the nose to the left of that, and just a hint of a mouth at the bottom, approximately in a line with the red dateline. 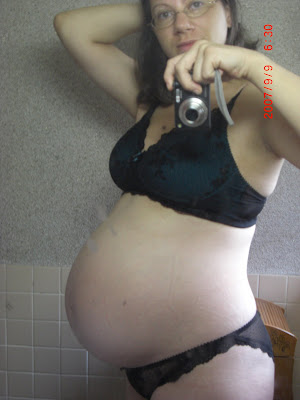 This one is self-explanatory! See how nice that new nursing bra set is! Only I forgot to clean the mirror first...might have another try nearer the time with the red set. 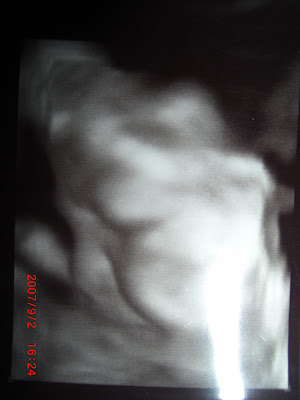 Another face shot, this time in profile. She is facing the left. The tip of her nose is approximately parallel to the '20' of 2007, a rounded cheek to the right of that, and the black line above is her closed eye.


Lena's off kindy sick today, she's finished watching Harry Potter and is just starting to get bored, she's taken the box of cards out of the toy closet, and is sitting there humming a song and sorting through the Charades cards. She's still in her pyjamas, because she thinks they look cute. She's wearing long-sleeve pyjamas again after a long hot summer.

It's finally cooled off a bit, enough to require some covering at night anyway. It's 11:25am at the moment and the air conditioner is on. I've totally finished work. It's strange but relaxing to have no set schedule. I'm giving myself lists of things to do...I have to finish marking some tests today, clean the bathroom (hands and knees is actually quite a comfortable position!), visit the 100yen shop, clean up at least one of the shelves in here and repair some broken things.

Two weeks to go! I can get tons of things done in two weeks, I suppose, but I'm still not calling it nesting, because I'm not restless, I'm feeling quite lazy, and I might just go have a wee nap after lunch!

Amy is not too well either, although she went to school. I should have taken her back to the city hospital where she was being seen, but I didn't want to brave the red tape and fight staff who seem to make it their goal in life to make things as difficult as possible. But we took her to the pediatrician, but he was away and we got the spare, who is a bit of a doofus, and just gave us ten days of cough meds. Well, if all this practice for the school sports day gets her asthma really bad again, I guess I'll just have to brave the city hospital's wacky way of organizing things!
Posted by Rachel at 11:20 am