Thank Goodness! I just spent five minutes typing the same password into blogger and hitting enter, like a moth banging into a lightlbulb, until I finally cracked it! Just add @yahoo.com.....duh...

We are spending a quiet Sunday at home after a three-day holiday at Victoria's temple in the mountains of Miyazaki. Check my blogs from May 2006 and 2005 for our previous trips there!

It was the same as usual and completely different as well - the coolest different thing being that Kanji was able to come this year! This is quite unprecendeted, as Golden Week is normally very busy for jobs like his, with other people going on long car-trips, and needing car washes. He could only stay for one night, so we took two cars.

Here he is, talking to some of the other husbands over the barbecue. The next day was cold and rainy, so swimming in the river was out this year. We did go wading, however, to see if the boys had caught any fish. After chilling ourselves thoroughly we warmed up and filled our tummies upstairs in Victoria's kitchen with scones with jam and cream (made by me) and cups of tea. We spent the rest of the morning playing scrabble while the children scattered to the four winds, I still have no idea where they went.

After lunch, we visited the hot spring in the nearby town, and then Kanji had to go home. He was a little concerned about the route - to avoid the holiday traffic, we take roads over the mountains, very windy with several tricky turn-offs, but he got back okay. 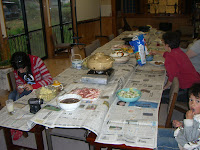 The rain continued, so we had to abandon the barbecue idea, and instead had dinner indoors. Luckily, the temple has bags of space, and we ate in a reception/dining room next to the main temple hall (where we all sleep). We still had barbecue, just cooked on gas grills on the table-tops. 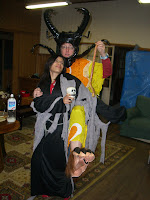 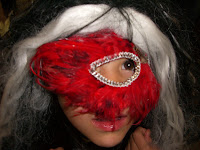 After dinner we had a ghost walk! With all the lights off in the temple hall, Victoria's husband started the ball rolling with a spooky story. Meanwhile, the grown-ups snuck away and got dressed up in weird outfits. Then the kids went for a walk through the temple garden and into the mausolem, with us jumping out at them. Poor Lena was terrified, and Amy wouldn't even come down the temple steps. But she very much enjoyed trying on the outfits afterwards! Here she is in a zombie wig and feathered mask. 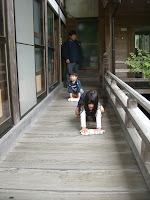 On the final day, we got up to do yoga and clean the temple, after a bacon and egg breakfast. Here is Amy washing the wooden verandah. Everyone left at about 2pm, including us. Lena slept all the way to Oita, where I took them to Toys'r'us. It was Children's Day, and we had some gift money left over from their school and kindy entrance ceremonies, so I let them choose some toys. The got Lego, a fluffly poodle and some doll clothes. We had McDonald's for dinner, followed by hot chocolate at Starbucks, got home at 8:30pm, and collapsed into bed! 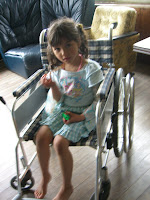