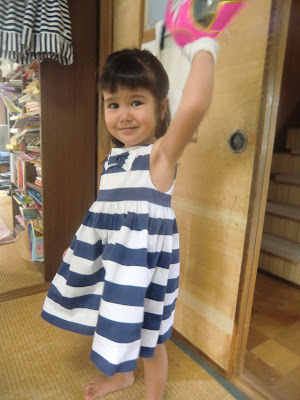 The birthday girl - no cute poses, she's decided she hates the paparazzi (me) this week.

Erica, filmed by Amy, reacting her seeing her cakes for the first time. 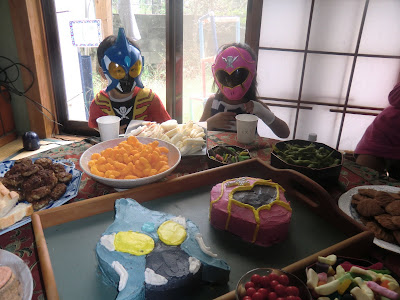 Yuuki and Erica with their cakes and matching masks. He is a Kamen Rider, she's Gokai-pink, from Gokaija, both are Sunday morning super-hero TV shows. 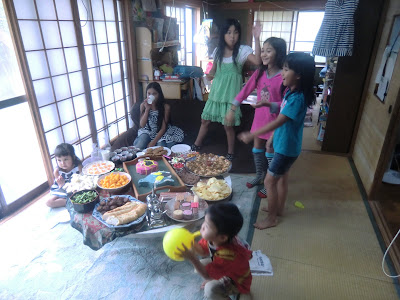 The power of Kamen Rider: all kids ignoring the sweets to watch it! 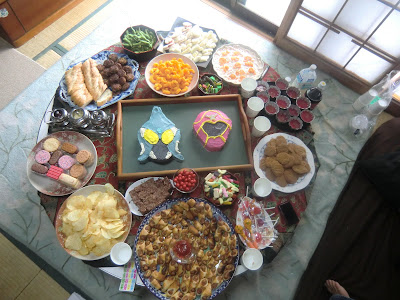 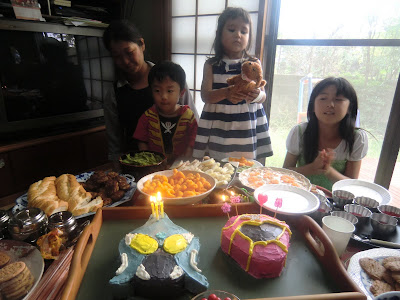 Cutting the cake; Erica and Yuuki get the first pieces
The Party. 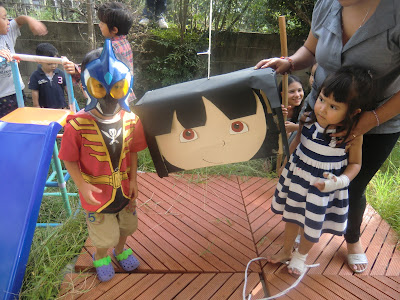 And then Ana arrived with the Pinata! Dora the Explorer (Erica calls her Dora-ble, because I kept calling Erica DoraDora-adorable!). I don't know why Erica looked so grumpy at Yuuki!

Centre: setting up. Yuuki on the left (see video below) and Erica having a go on the right.

Our neighbors grandkids, Kiara, Airi and Yukia. There was one more little boy but he was too shy to have a go.

Left, Max; centre, Lena; right, Momoka - she was the best!

Left, Amy; centre Karin, right - Raul on the fence! The pinata works best strung over a rope that can be raised or lowered depending on the size of the kid hitting it. Kanji was on one end in the house, and Raul jumped on our stone wall - luckily he did not fall in the river behind!
Yuuki! Go Yuuki! A little harder...
The final whack, courtesy of Yuuki's mum. And the lolly scramble begins. 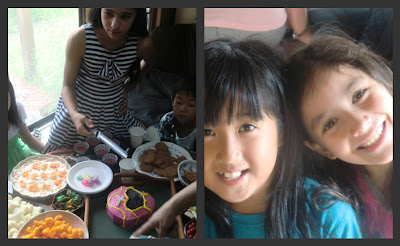 Left, Amy with a knife. Right, Momoka and Lena

Dipti arrived early enough to have a quiet moment with Erica opening her present, a book.

Erica opening her present from the Tambourinos - a ball tent! It was amazing, kind of like a magic trick, we opened it up and BAM all the children went away and silence descended. 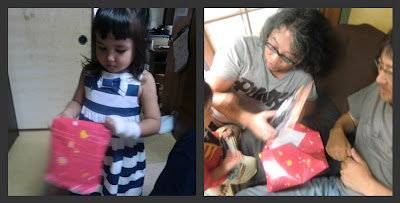 Erica delivering our present to Yuuki 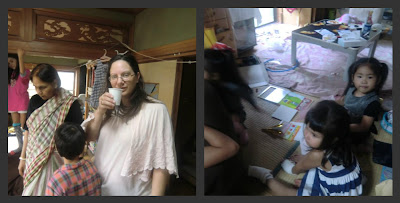 Me! Along with Lena, Dipti and Max. On the right, Erica's posse, Hana, her, and Kiara. 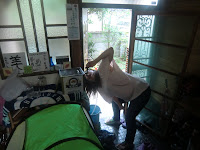 Erica looks so grown up in the first picture! Interesting that your neighbours have a granddaughter called kiara - that's basically my name (the italian version) and I've always liked how it works here and I could have kanji, but I've never heard of anyone with the name. When I was an ALT I did try to convince my students that it would be a great name for their future offspring though ;)

Actually I know TWO Kiaras! Maybe it's coming back into fashion and you'll be able to say 'I told you so'