The Big Day. Well it worked out okay in the end, kind of... 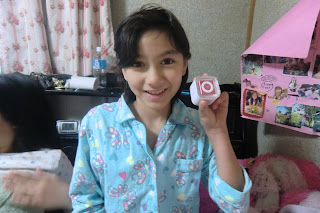 First thing in the morning, Lena (sleeping in my bed with Amy) woke up to her present - a new iPod shuffle! She was expecting it, as Amy got one for her 11th birthday, but the way I wrapped it caught her off guard and she momentarily forgot about it (it was in a small gift bag inside a box with wrapped CDs) and claimed to have been surprised! 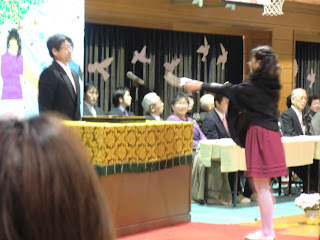 Next up was Amy's primary school graduation. Yep, I still can't quite get over the idea of 'graduating' from any place where 'graduation' is automatic, especially the level of formality involved. Here she is receiving her graduation certificate with BOTH hands, in the proper Japanese manner. And yes, she bowed, clearly all the kids had been well trained in how to bow with a certificate in their hands!
I only nearly cried once, when they processed in. They all looked SO grown up! Amy is big enough to fit into adult clothes, so she was able to buy this gorgeous dress (the top part is shaped like a white blouse, but it's in one piece). She also loved the black poncho-style jacket. 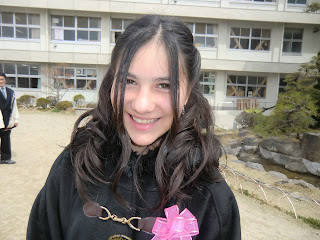 In front of her school after the ceremony. After the official ceremony in the hall, with speeches and songs, all the kids trooped back to a classroom, parents following behind, to farewell their teachers and present them flowers. Then it was back to their own classroom to receive their certificates all over again (apparently after getting them in the hall, they stashed them in a pile somewhere so as not to crease them) this time quickly rolling them up and slipping them into a case. They were also gifted another photo album (they got one at their entrance ceremony too, glad now that I didn't fill it as we now have two to fill with school pictures!)

Then the graduates filed out of the school arm in arm with their parents, and passed through a human tunnel of 5th graders, who were both too short and too tired to make a proper tunnel. Then it was photo time. Amy and I had our hair done that morning at the salon, hers looks super!

Meanwhile Erica was at home! She was originally going to come with us, but she had not recovered from her mystery virus and had a temperature of 38.5 or higher, very listless and quite likely to vomit at any minute. So we made some emergency phone calls and finally found my friend Dipti free to come and watch her for the two hours or so we were at the graduation ceremony.

We also canceled her hair appointment and our family lunch out - she needed her energy for her event, rather than being exhausted by being dragged out to lunch and to have her hair done. I rushed off in the car to pay the salon bill, deciding at the last minute to book poor Lena in for later on so she wouldn't have to miss out on her birthday, and buying McDonald's for a picnic lunch at home on the living room floor while Erica ate three bites and slept some more.

We managed to get her dressed, and I told her she was going to a party. Big mistake. Erica is normally very enthusiastic about things, but she really had no energy left to work with today - when we pulled up at Keio, she decided this wasn't the party she had been anticipating, and pulled a full-on melt down. Wouldn't even go in the door at first. We took it very gently - she was really sick after all - and managed, very slowly, to get her in the door. She would not wear the cap and gown, and just sat on my knee, resting her poor sorry tired head on my chest. We managed to balance the cap on her head in this pose, and get the gown around her in time for the presentation of her certificate, though I had to go with her for that. 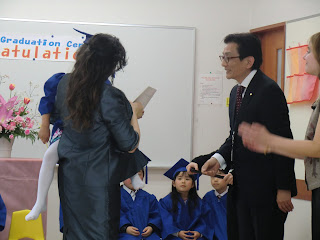 Since they had practiced this over and over I figured the best thing to do would be to just follow whatever came next naturally, and I steered her over to her seat with the other graduates, waiting behind her just in case she threw up! She was able to do her reading and songs, thank goodness they had practiced so much that she was able to just move through the motions. 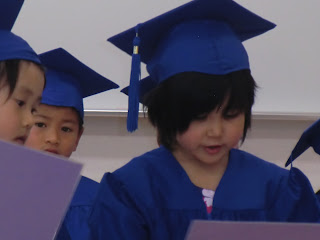 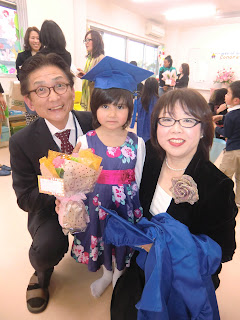 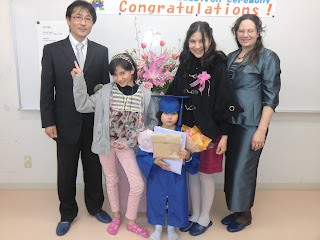 On the left, she'd perked up a bit by the time it ended, here she is with my bosses, out of the gown now and in her pretty dress. On the right, a rare family photo! Expect to see this on the New Year card, it's unlikely you'll get us all in the same place so well dressed again! I also had to do a speech at this event, on behalf of the parents, and Kanji, as head of the PTA, had to do one at the previous ceremony. We were a busy family! 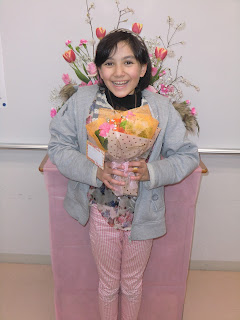 After the kindy graduation finished, off we went to the hairdresser (third time in one day!), then it was home for Lena's birthday dinner, which I didn't start cooking until after 6pm! It was a great dinner, if I do say so myself! Bruschetta and a salad with baby leaves, tomato, cheese, and parma ham for starters, lasagna for the main course, and banana splits for dessert (at about 10pm!) We all watched a movie together and toasted our birthday girl with beer and sports drink! 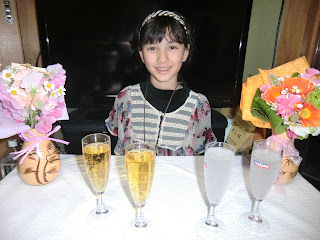 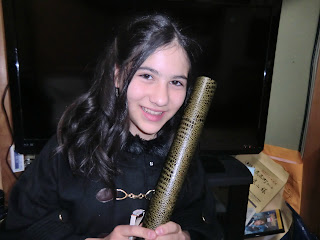 Amy with her graduation certificate 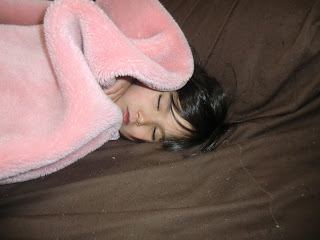 Poor little one missed the party - asleep again
Posted by Rachel at 10:01 pm