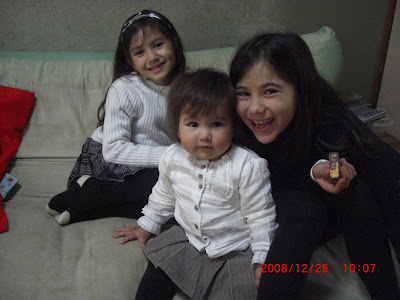 My three girls wearing their new clothes from Santa. Papa was getting into the
Christmas spirit more than ever this year - he was the one who woke us all up with the video camera not long after six, wanting to catch the present-opening before heading off to work. I would have been happy to stay right where I was. Erica also had other ideas, and being a baby, got away with it and slept right through the proceedings. 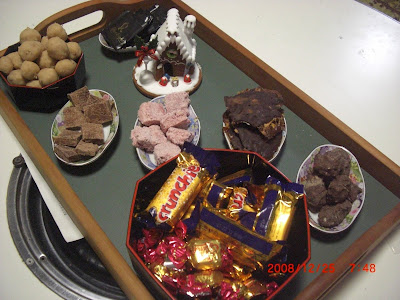 Christmas sweets including Russian fudge balls, After-dinner mints and the Gingerbread house in the back, chocolates in the front, and on the small plates left to right, chocolate fudge, coconut ice, florentines and chocolate-covered coconut ice.

We got up and had our traditional ham and eggs breakfast, which always reminds me of childhood Christmases in New Zealand. I buy the nicest ham I can find, which is close, but not quite, a ham on the bone. We also had cocoa pops, a holiday/birthday treat in our household.

After breakfast, we tried getting hold of the NZ cousins to open their presents, but they were just about to eat lunch, so we opened them up anyway! Then I set to work, cooking, cooking cooking. It's good to keep busy, literally creating Christmas. Kanji came home and we had another round of present-opening, with our gifts to each other. 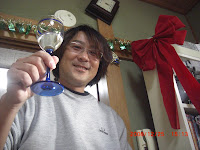 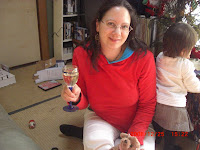 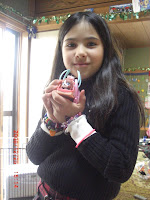 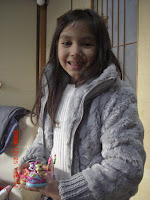 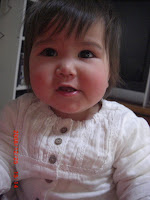 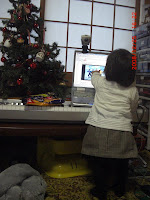 Right, how to keep the baby from throwing Christmas dinner all over the room

I miscalculated the turkey, so our midday Christmas dinner, which I planned for 2pm, ended up at 4pm! We were quite hungry by then and sick of sweet treats, so we really enjoyed it. 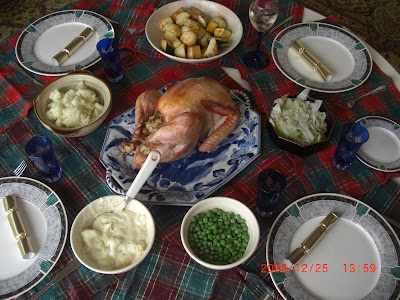 It was so late it became the evening meal, and the kids all had a bath while I prepared the desserts. 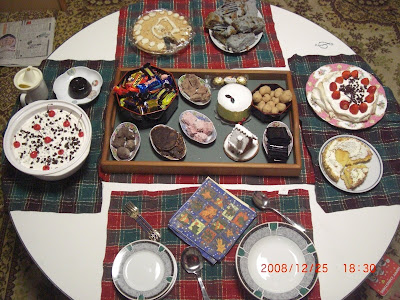 Clockwise from left, trifle, steamed pudding and custard, Bailey's cheesecake, carrot cake Birthday cake, pavlova and Japanese Christmas cake. In the centre, the sweets from above plus a traditional Christmas fruit cake.
After dessert, I was checking the email, Kanji was watching TV, Amy and Lena were playing with their toys....the coast was clear for Erica to help herself to pav. She was stunned with the delights of strawberries and cream! 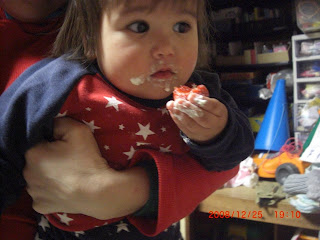 Merry Christmas!! Sounds and looks like you had a pretty full on but fun few days over Christmas. Erica has gotten so grown up in only the few months since we saw her. We are approaching midnight here and people are letting fireworks off already. My sister's dog is making just as much noise running round the garden in protest!

Happy New Year to you all and can't wait to see everyone again in Feb or March 2009.

OMG Are they After Eights I see on that tray...drool drool.
Happy New Year to you and yours

Oh.. do I ever miss after eights.... Happy Holidays.. a bit late but Have a fab new Year!!! Looks like you had a blast with the family.. and you had snow?? We MAY get some this weekend...