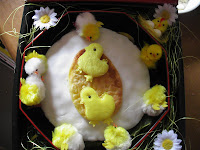 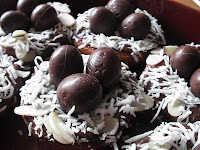 Cake and nests. Charmaine in Kokonoe made the cake, give her a shout-out on TellandSell if you want one! I froze half, because while Charmaine's fruit cake is the BEST ever, fruit cake remains an acquired taste, it seems, and something that no-one under the age of 30 will touch. So I'm saving it for another occasion! Compared to the time and effort and months of preparation that go into making a good fruit cake, the nests were almost sinfully simple. Commerically bought 'Custard Pie' cakes, which have a custard cream filling. Cut a hole out of the top to expose the custard. Messily smear icing or melted chocolate around the edges and sprinkle with coconut and slivered almonds. Pop in the eggs, and you're done. The eggs are not 'Easter' eggs, but the foil wrapped ones that come in a pack of five and are always sold in the sweets section of Japanese supermarkets. 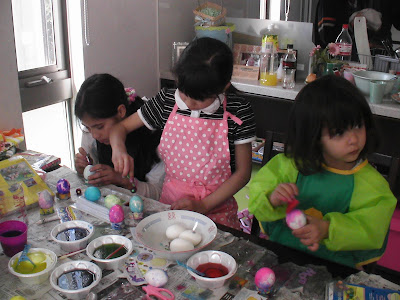 Coloring Eggs. Pinglet painted the same spot over and over in pink and left more dye on the chair than on the eggs, but she had FUN! A. and L. appear to be taking it very seriously. illahee's three colored 30 eggs between them! 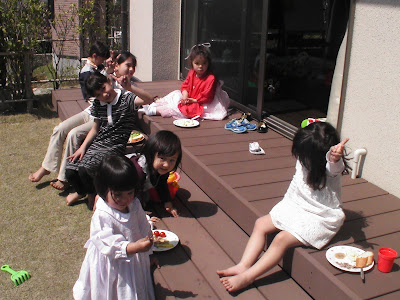 I love how pinglet is valiantly holding up that peace sign despite not being able to look into the sun for the photo! Erica has her own agenda obviously. M. looks so adorable in this one! 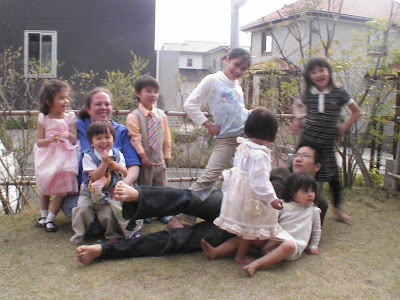 M.'s Dad will ALL the kids -except M. No idea where she had got to! 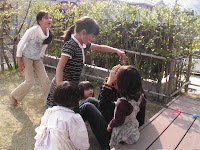 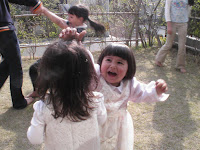 Grass Fight!!
We ended the afternoon at the local play park, where Erica became obsessed with the roller slide. Spot A and L on the right! 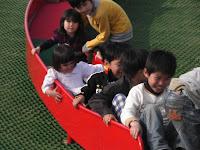 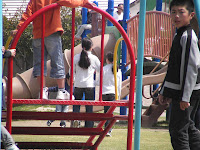 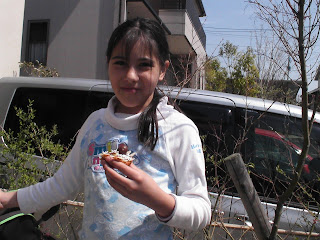 Amy and her nest 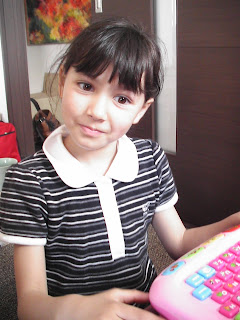 Lena, who had had a nest the day before when we made them, skipped hers. I wish I had such self-control! 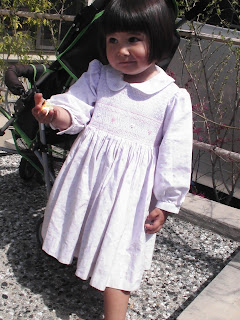 A strange little child we found from the 19th century in the garden. Part of the deal with the Easter party was having a chance to get the kids dressed up in the dresses we hardly ever get them dressed up in, and I chose this one, which I like the least, because I thought there might be the chance she'd get food dye all over it, and while that would destroy me if it was one of her cute new Pumpkin Patch dresses, I figured I could live if this one had to be trashed. 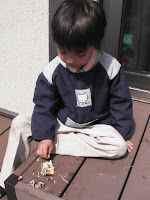 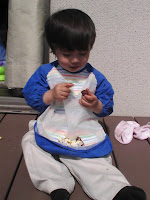 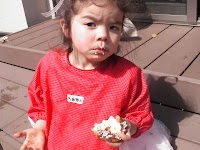 Illahee's three. I think Hiro stopped eating after he dropped his nest on the deck. Maybe. Tommy was absolutely fascinated with the hole in the egg. Sasha loved her nest. And I mean she LOVED it. She wanted another one...

Pinglet as Pyu-a Blossom. I think. M. pulling a face. 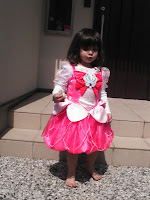 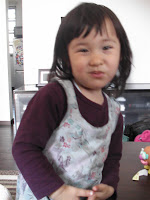 love the look sasha is giving the camera.

Yeah, it's like "don't you dare steal my cake, this is MY cake!"

Hope you get this before tomorrow. Will be over with the car - probably at yours about half ten??