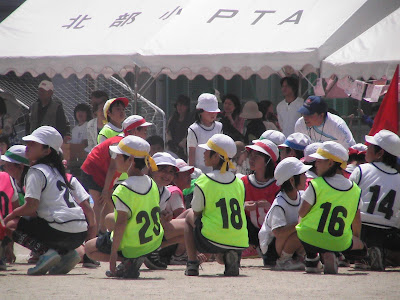 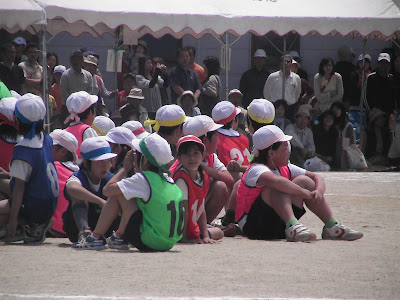 Lining up for their relays. No idea who won. Amy ran 18th, did okay. Lena ran 1st and 10th, she's a fast runner so she ran twice to make up numbers. 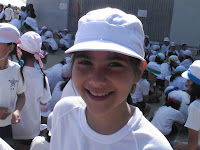 The mighty athletes and their self-portraits. Every year they draw one for the undokai, and they are strung up around the edges of the team tents, drawn on paper matching the team colors. Underneath they write their name, and a wish. Amy's says 'to finish', I think, and Lena's says to get first in the relay. Then every year when it's all over, they are thrown in the trash. I guess they can't be bothered trying to find each person! It's a bit of a shame, so I make sure I photograph the pictures some time during the day. 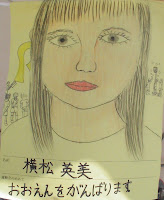 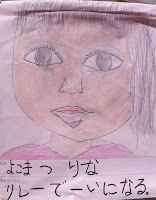 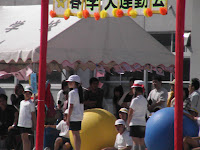 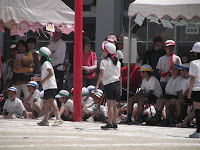 Foot races. Amy on the left, just in front of the yellow ball. She got a first. Lena is in the centre of the photo, with a red ribbon on her hat, just to the right of the red pole. She placed third. If you're wondering why she got third when she is a good enough runner to run twice in the relay, it's because she had to run against the other really good runners! 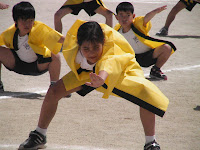 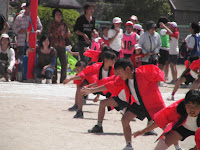 Soran dance. Lena is the 4th kid from the right/front, she's looking to the right, her head directly below the white t-shirt. 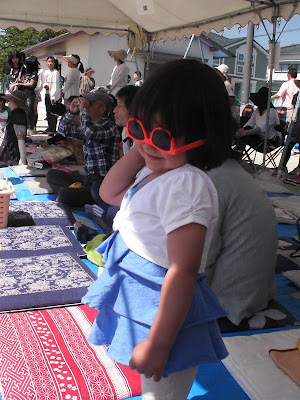 Baby Gaga and those zabutons! This was still in the morning - you can see why this was the less popular tent, as the sun streamed in all morning. It was hot, but I had a superb view of the races, and it was shaded in time for lunch and the more restful afternoon period. 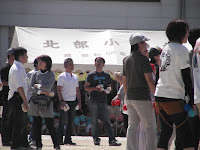 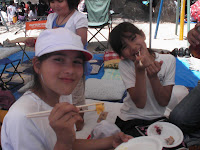 Parents' event - throwing balls into a basket. Kanji's in the centre, wearing a black t-shirt, just to the right of the guy wearing white. Kids do this too, but theirs is timed, then the balls counted. For grown-ups, the much more humiliating method of "First to get all the balls in wins, Last to get all the balls in gets laughed at by everyone while they try desperately to get that last ball in!". Lunch! Baachan arrived late and left early, but spent a little more time than Jiichan, who bascially only turned up for lunch. 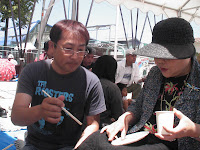 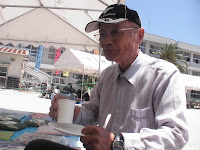 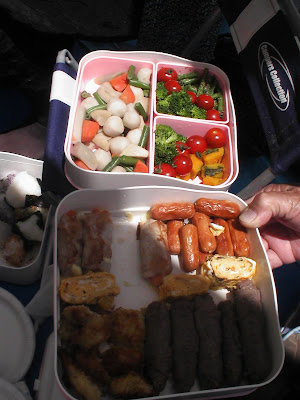 The award-winning bento! We informed Baachan the undokai was in May this year too late for her to order a fancy bento, so I was stuck making the whole thing for everyone. Or rather I should say, I finally had a chance to prove I could make one, after having my efforts ever so kindly undermined by the purchase of a huge 'real' bento every year. Well, this passed muster, with Jiichan even saying it was better than Baachan's, and insisting we take a photo to show Mie, arbiter of all taste apparently. It's not that flash, but it was delicious! 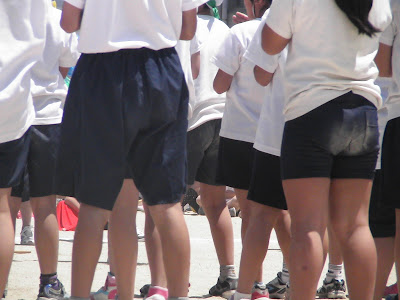 Totally superfluous shot of the baggiest and tightest shorts of the day!