THE BAD
Restaurant Prices - At least double the prices outside the park! I ordered lightly, including only two meals for lunch for first day - here's our $10 hamburger: 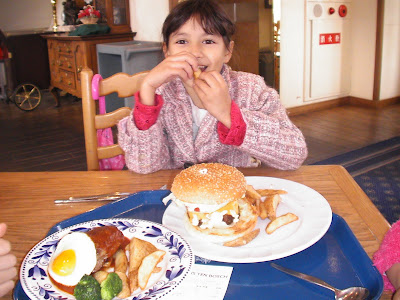 Rain Can't be helped, and really it wasn't so bad in the morning at least, when we were under the bike canopy. Except for after we'd left it for half an hour or so to go see an attraction, then the rain would puddle on the top and come cascading down the edges as we moved, wetting us a half leg each!

Restaurant Queues Shocking! We originally decided to eat at 5pm to avoid the queues, but at that time, we were right outside an attraction and decided to go in instead...a decision much to be regretted later on, when we were informed that the waiting time for our preferred restaurant was over 90 minutes.

We juggled a few other options, and K's Mum rushed off to check wait times while me and M's Mum took the kids up the tower. Waiting in line (again) for the tower elevator: 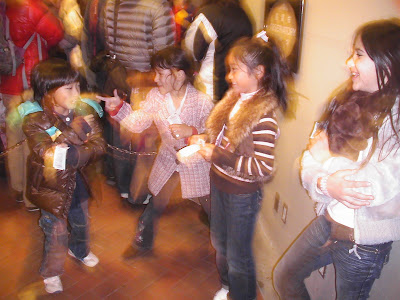 We settled on the cheaper Italian place (which was very much worth the wait!) but still had about a 40 minute wait. During which the kids had LOADS of fun! 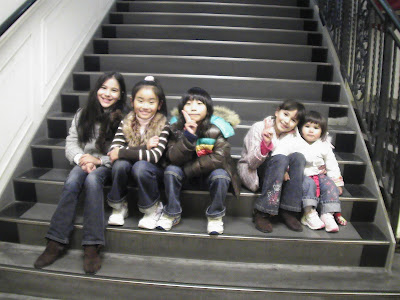 They sat still all at the same time for approximately three seconds. This photo is a miracle.

Distances The park really is a village, and you have to walk a LONG way to get anywhere! While the attractions, restaurants and shops have their own areas, we always seemed to be half a mile away from wherever we wanted to be!

Feet I even wore my sensible shoes! But there was just SO much walking, I got sore feet anyway. Amy and Lena wore their boots - very comfortable soft suede ones, but not very waterproof, so they ended Sunday with damp feet that were so smelly I wouldn't let them take their boots off in the car!

THE UGLY
Blood Erica's. And all my fault. Just before lunch on Sunday. She had held her umbrella from the bus stop to the restaurant. She fought to keep hold of it, while I was cold and wet and wanting to get inside as soon as possible. With no inclination to be patient with her, I just yanked. And three of the fingers on her right hand got cut on the lip where half of the pole slips into the other half (of a collapsible umbrella). She wailed, and only stopped when I managed to get bandaids on all three tiny fingers and cease the blood flow.

No Tunes Honestly, I nearly cried. After listening to the four Lazytown (kid's show) songs I uploaded that morning three times over, with the battery cutting out after we heard them, I stopped in Hita and bought a portable speaker so I could use the lighter connection for power. After spending 3000 on that and another 1000 on batteries for it, I got on the expressway and realized....that those four songs were all I had. Somehow I had lost ALL my songs while trying to upload the podcasts. Goddam it I HATE HATE HATE iPod 'syncing'. Whoever invented the new iTunes management style should be shot. At least that's what I thought as I embarked on five hours of driving with NO songs.