Despite running here and there Hawera and half the North Island like a bunch of headless chooks visiting and touring, we do end up spending some time at home with Grandma! 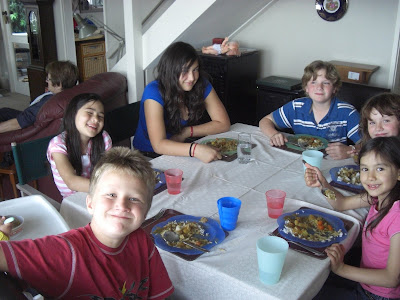 I came a long way to eat yummy NZ food, but I spent the first day cooking Japanese! I spent the day unpacking, but the cousins couldn't resist coming over to play with Amy, Lena and Erica. So we decided to cook up a pot of Japanese curry, two actually, one spicier than the other, and invited everyone over to eat up. 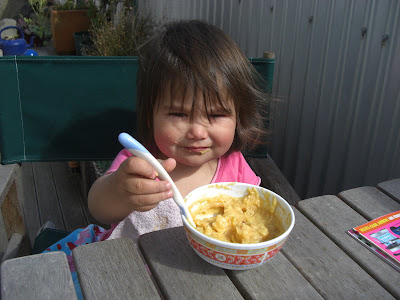 On Grandma's back porch enjoying the last warm rays of summer sun before the cooler autumn temperatures hit. Erica enjoying what I think was maybe pumpkin, but could just be some random baby food jar from the airplane. Either way, her nickname is pumpkin. She answers to it! 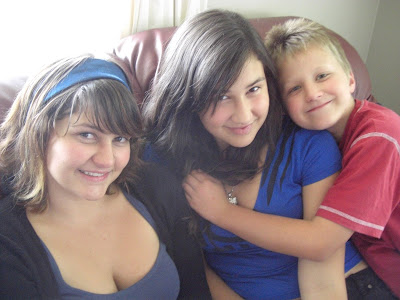 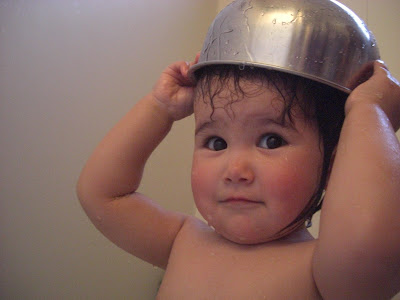 Erica in the bath, wearing the pudding basin, an indispensible bathing tool in the Greenwood household. She's standing up - she never got used to the sit-down NZ baby-bathing style. In Japan, the bath is deep and narrow, and she stands up in it. 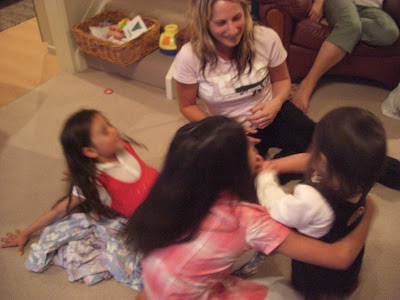 Aunty Becky is the absolute queen of tickling. She can take on all three at once and get the upper hand. I think she practices with her dogs. 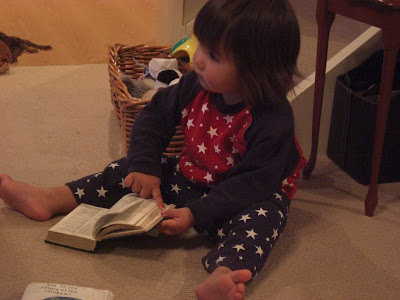 Erica's favorite toy at Grandma's - her dictionary. The compact size fit nicely in her small hands, and she loved flicking through the pages, pointing at words, and 'reading' 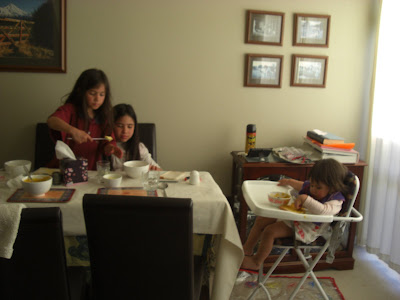 We take so many photos of extra-cute stuff and special occasions, but I think in years to come, the photos of everyday, ordinary stuff become more interesting. How many photos of prettily dressed posing children do you need (I know, I'm the worst, I can't stop taking them!)? Already this photo brings me back to our time in NZ more than the other, 'special' ones. We're eating Grandma's Thai curry pumpkin soup, which is delicious! Lena's still in her school uniform, which is a no-no, she's supposed to change out of it as soon as she gets home from school. She usually has no problem with this, as she's nothing if not a fashion victim, so something must have happened today to stop her getting changed. You can see the thick blanket under the table-cloth, put there to try to protect Mum's lovely table from bangs and heat marks. The highchair was a cheapie from the Hospice shop that's already been loaned out and brought back, and will live in Grandma's shed for all the new babies to use. You can see the splash mat under it, in a (mostly futile) attempt to save Granma's dauntingly cream carpet.

Cosy on my couch 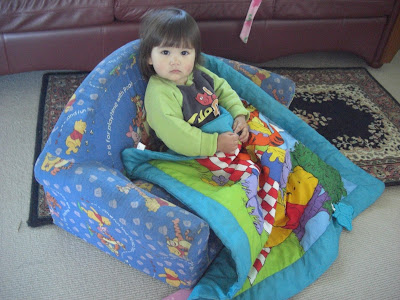 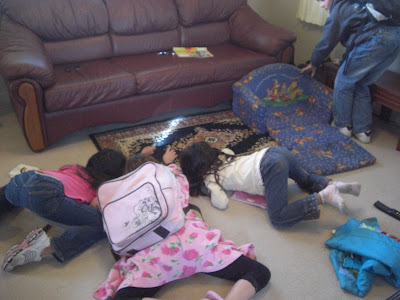 Mum's cat is nuts. Instead of catching the mice inside the house, Squeak catches mice outside and brings them in. Then he lets them go so he can torture them in time-honoured feline fashion, only they are too quick for him, and get away and race under the furniture. Here, Amy, Keelah, Lena and Michael are all attempting to catch a mouse that ran under the couch. They had no chance - our best bet is to chase it out from under the furniture with the cat in the room, and hope that he catches it. The worst day was when I was quietly reading in bed and caught sight of one climbing up to my pillow. The natural human 'flight or fight' response, here taking the 'squeal and jump' form, scared him away. Of course I was then faced with an even worse situation, as the kids sleep on the floor! I recruited Grandma, and we searched and searched, throwing nearly everything out of the room (a lack of drawer space meant most of my clothes were piled on the floor, along with blankets, book, school bags, etc). We did not find him, and I think Mum was beginning to doubt me, so we gave up. However, I could not relax, and sat up reading, and waiting. Until I saw him toddle across the floor from the wardrobe (the only place we didn't look) and out the door. I then quickly shut the door, and later when I heard the cat come in, I went and fetched him and put him in the room with us. Mouse out, cat in, a much better set-up! Squeak heard him though, so I had to let him out, then listened as he stalked him through the piles of clothes and things that were now piled up in the corridor! The mouse was caught a few days later in a trap, the sight of caused all of us to scream in horror and Chris was left with the awful task of chucking it over the fence (into a paddock, not the neighbour's garden!)

Taken for a Ride 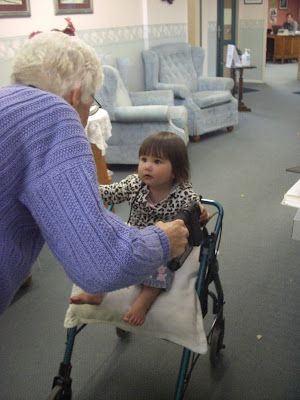 The serious expression belies the fun she was having, really! At least, she should have been having fun, because she'd been trying to get onto to an old lady's Walker at the rest home since we got to NZ, and finally this kind lady offered her a ride! 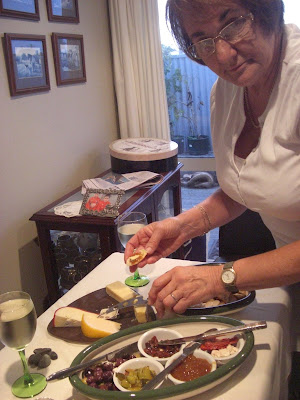 Another thing I really like to do in NZ - drink crisp, fresh sauvignon blanc accompanied by a plate of nibbly things, like olives and cheese and crackers and pickles and relish. 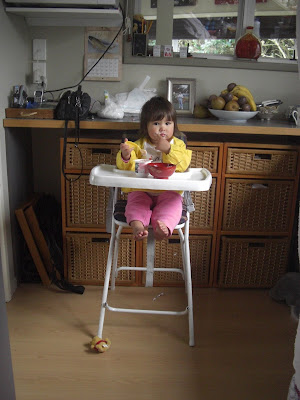 Typical kitchen scene, Erica in her highchair munching away. Oh, actually not quite typical, as there is no food or plates on the floor yet! 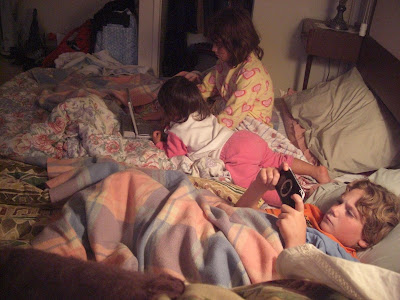 This is how Amy and Lena sleep when staying at Grandma's. Of course, this is not Amy and Lena, it's Michael and Keelah, who stayed with us one night, while Amy and Lena stayed with Josh. Michael's playing his playstation, and Erica and Keelah are watching a DVD. Lena lamented at one point that she comes all the way to NZ from Japan, but has to sleep on the floor! So she got to sleep in a bed at Keelah's house. The wardrobe behind Keelah is where that damned mouse was hiding. It was still not caught at this stage, I remember checking the trap under my bed before they slept. 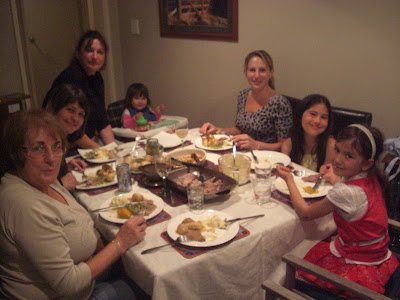 A superb fragrant mutton roast with all the trimmings, which I, sadly, could not eat much of due to the tummy bug I'd picked up at the weekend. I did enjoy the flavor though, even if my body punished me later. A bit like morning sickness - which is was NOT!
Posted by Rachel at 10:33 am