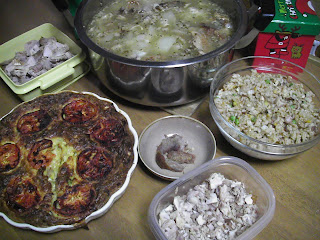 I'm the queen of leftovers. I've never met a leftover I couldn't cajole into becoming a main dish. (though I'm having some challenges with overcooked coconut ice and broken candy canes. Suggestions anyone?). Turkey of course, is the king of leftover food. In fact, I commented to Kanji on Boxing Day that the only reason I really roast turkey anyway is so I can have turkey sandwiches for the next week. That day, we had a roast re-hash, and it was SO much yummier than the night before, when I was rushed and chatting and had had too much champagne. Turkey sandwiches that night, with a soup made from the giblet stock I made on Christmas Day, but didn't use in my gravy, as the gravy was so damn perfect!

On the 27th I took some to a party with two other Kiwi mums and their leftovers. Sandwich again for me on the 28th, as we had lunch at a friend's house and the girls went out with friends for dinner.

On the 29th the day finally came to dismantle the everlasting bird (no matter how many sandwiches we had, it didn't seem to diminish in size at all). I made a turkey quiche (left) and turkey fried rice (right) then divided the remainder into large chunks and small chunks to be frozen and used at a later date. I orginally intended to cook them up into a sauce, which would freeze better, to make turkey pie later on, but I ran out of time. I'll let you know if it works to freeze turkey dry! One more tiny little bowl in the centre is the dry pieces of meat from the edges that were good to nibble on, a kind of turkey jerky.

The bones, skin, some but not all of the fat, and some chunks of leftover stuffing went into the big pot with some onions, garlic, sage and bay leaves to make a stock for soup. I added soup mix (lentils, split peas and barley) then all the leftover veges - kabu (a kind of turnip), carrots, an onion, sring onion, 2 small potatoes and one neglected tiny sweet potato plus some beans, mushrooms and celery I bought specially.

Turkey sandwiches again last night! And turkey soup for lunch. With luck it'll all be gone by tomorrow, though I might keep a plate aside to make a sneaky turkey sandwich, as I might need a break from all that cold seafood and soy flavored Japanese New Year food!
Posted by Rachel at 10:06 am

Sounds like you made some good things with your leftovers! I am not sure what coconut ice is, but with the crushed candy canes you could use them to roll on the outside of a cookie sandwich or on the outside of a marshmallow on a stick to stir into hot chocolate? Or perhaps, stir into melted chocolate and let harden into chocolate-peppermint bark?

Jenn, thanks for the tips! I think I'll try the chocolate bark.

Coconut ice is a kind of fudge made from icing sugar (I think that's confectioner's sugar in the US), milk and butter with a drop of vanilla and a cup of coconut thrown in at the end.

I overcooked it (I don't have a thermometer so I have to go by the drop test or when it just 'feels' right!) and it turned into more of a biscuit crunch thing. I'm thinking of pulverizing it and adding some flour rubbed into butter, to use as a crumble topping. I have some rhubarb in the freezer that would be perfect. Rhubarb and coconut crumble?