So tempting to call this post Karate Kid, but that's just too cliched, so I chose the Japan title.

Erica has started Karate lessons. Amy and Lena had the option too, but declined. Here's my little fighter giving it her best: 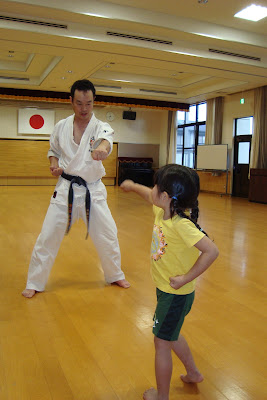 She's learning the 'kata' for the first year, form, positions, how to bow! Almost the whole first lesson was how to bow. VERY disciplined, which is just what my little tearaway needs. She was told on the second lesson (above, still no other students in the class) to not hit or kick other people, something we all know from the movie, right?

We were also given a list of rules, or rather lifestyle guidelines, including things like 'be friendly', 'study hard' 'take care of my body': All five numbered 'one' in that odd Japanese manner: 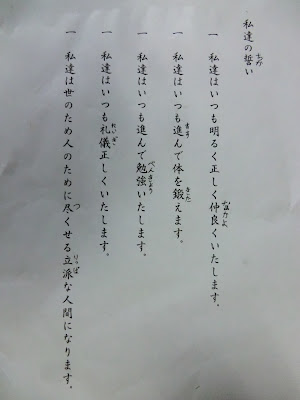 She missed her third lesson with a cold, and for her fourth, I was in Kyoto and she went with Baachan and Aunty Mie. She did not participate in the lesson, but apparently the teacher told them this was quite normal for kids her age, and to just keep bringing her along anyway. So we turned up again this Monday, and he sat her down on the chair and told her she could watch, but she had to sit still and quiet (quite impossible of course!).

There were four other students in this class, so I think watching them finally convinced her it would be more fun to join in than to sit and watch, and she joined in, in the end. Sensei is very strict, but gentle. He even gave us new Mums a little mini-lecture - don't use his name as a threat at home, but do tell them to sit up straight 'like sensei said'.

He likes us to be there for the lesson - it's only 40 minutes, so there's no time to go somewhere and come back - but not to join in the reprimands and keep saying 'shh' 'sit down' 'do it right' etc etc while he's teaching! As a teacher I totally get that, but Baachan had a bit more trouble with it! Kept interrupting to add her piece. I suppose it's hard for her since the teacher is her nephew. That's why she is tagging along - and paying the fee, yay! She let slip yesterday 'and you can take her when I can't go' which I was kind of expecting... damn cos I was hoping it would be the other way around, especially since it's twice a week. Well it means if I can't go, I can ask her, but it'll be me. Sigh, another naraigoto/soccer mom (what DO we call that in NZ?) thing to add to the schedule, but maybe my little Princess will turn out to be a super fighter. She certainly already has the voice for it:

That's awesome! I would love Shou to start but can't with hub's late work schedule, Granny K not driving, rah rah. Let me know how Erica gets on. I don't know what we call Soccer Mom in Kiwi. Hmmmm. Definitely not rugby mum or netball mum.

Karate sounds awesome! So weird that they are all numbered 1!