We always hold Kanji's birthday party on Christmas Eve (see post) but this year was a little different, we added an extra event - a trip to a drive-in movie. No, Nakatsu doesn't have a permanent drive-in, it's held just once a year on Christmas Eve. We missed the first one last year as we were in New Zealand. It was part of a Winter Fantasia event that included two drive-in movies, a kids' movie at 5pm and a grown-ups one at 9pm, with fireworks in between, plus bonfires and festival stalls and even an ice sculpture.

Before we left we gave the kids their present from us, boots, a new jacket and pyjamas. 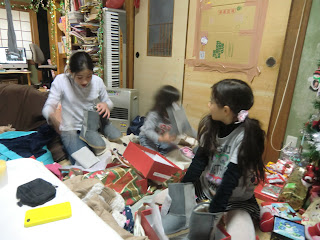 The drive-in was at the fishing port on koiwai, the island in the mouth of the river. They have a big enough block of space for it over there, and no chance for people to sneak a view! The sound was through an FM radio station. The kids sat along the front seat - times like these you wish you had bench not bucket seats in front! While I sat in the back and had a nap. I'd seen the movie before - How to Train a Dragon - and it was in Japanese this time, so I thought my time was much better spent catching some Zzz's!

But not before we all tucked into some hot chocolate!! Into the cups we got at Hong Kong Disneyland last Christmas 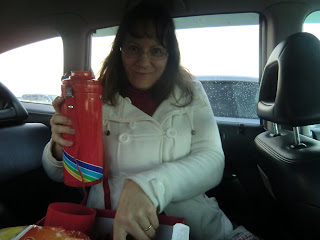 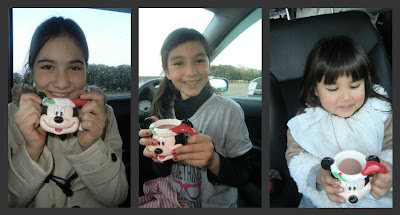 After the show, we went for a tour of the Christmas Lights houses. There's one street in Nakatsu where nearly all the houses participate. And then there's this house, which is by far the best, with not a surface uncovered, and extras all over the garden. It's also in the middle of rice paddies, so it can be clearly seen from afar. There was a traffic jam on the tiny road through the rice paddies leading to it!

Last but not least, the carrot, cake and milk for Santa, looking lonely on our windblown balcony. 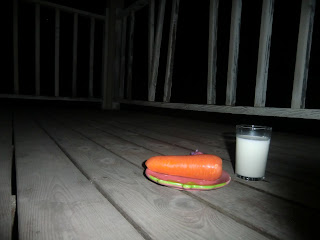