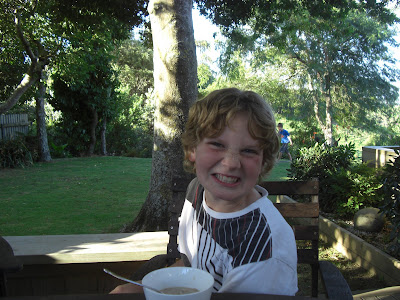 March/April is such a tempting time for me to go back to NZ, not only because of Easter and my daughters' birthdays, but my big sister Maria and her son Michael have their birthdays in March as well! Michael had some friends over, then they had a barbecue to celebrate their combined birthdays - Michael was born a day before his mother's birthday. 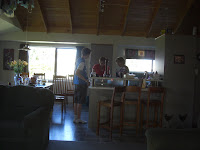 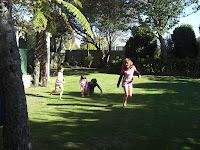 I somehow managed to go to my sister's birthday party and only get this one photo of her, in her kitchen! Shame. On the right is the front yard, with several children playing. I was too busy chasing them and the over-excited toddler to get a nice photo of the birthday girl! 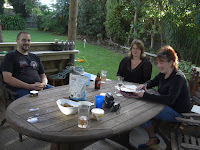 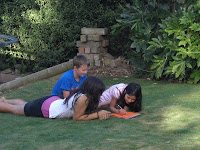 My brother, sister-in-law, and sister at the outdoor table. Amy with two more cousins on the back lawn near the tramp. She was showing off here, writing in Japanese for them. 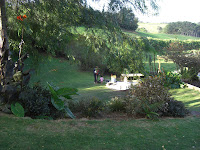 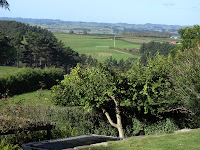 Definitely something you don't see in Japan much, this is my sister's backyard! They are in town, but with a gully out the back that doesn't invite much development, luckily for them, as the town is expanding in every other direction. Their property includes the lawn in the right corner of the photo on the right, the trampoline just visible on the terrace below, and so on down the hedge line. Plus all of the photo on the left, which is just to the left of the photo on the right. Right? 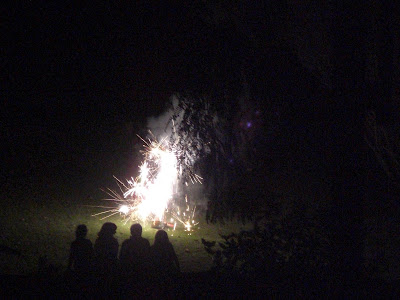 The night ended with some fireworks! Kiwis will be aware that fireworks are strictly limited in NZ, with gutless varieties available only at Guy Fawkes on November (for those unfamiliar with Guy Fawkes night, it's a charming English festival that 'celebrates' the execution by fire of a catholic who tried to blow up the English parliament, and failed. It's celebrated with fireworks and bonfires on to which are thrown straw effigies of the unfortunate Guy.) Michael's Dad cleverly kept aside a bunch of fireworks from back in November just to celebrate this night.

And a few extras...cute baby! I love this outfit, from Pumpkin Patch. And in the second one my brother's dog has a go at Erica. She LOVED him. He's wearing a nappy so he doesn't wee on Grandma's carpet. 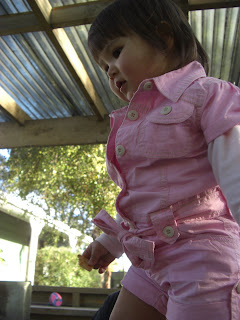 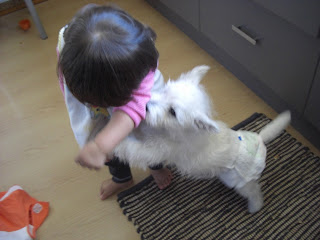