When you are in a swimming pool.

We did make it to the pool today, despite Amy having to GO TO SCHOOL! When Kanji warned me that the Keio camp might clash with school, I assumed he was talking about the August 6 peace event they always have, but no, he meant the three extra two-hour lessons the whole Fourth Grade has to have this week to catch up. I was annoyed, and even more so when Amy told me that the reason they are behind is because the teacher spends so much time disciplining the naughty kids.

And shocked of course, when we learned this last night as we ate dinner! Not wanting to lose my holiday I then and there vowed that we would go the pool anyway - the lesson is from 9-11, so I prepared the picnic, got everything in the car and picked her up. I had one visit to the bank to make, and we made it to the pool in time for the 11:50 break (everyone has to get out of the pool for ten minutes every hour), so we didn't feel we were missing out on anything as we sat outside the pool on some lawn by the car park having our picnic. 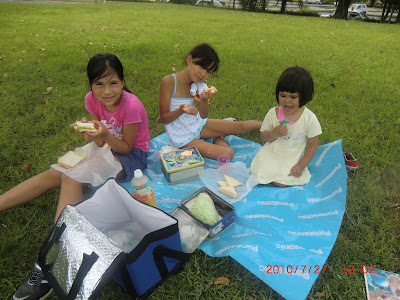 The lightening stated up just after 2pm. Everyone got back in the water after the break, everyone wondering... but after a few big booms and SEEING the flashes of lightinging from the pool, I had just decided that we were going to go home now, when everyone was chased out of the pool by an announcement over the loudspeakers.

The BIGGEST thunder claps came as we were in the dressing room, and when we came out, most of the people were waiting out the downpour. We decided to make a run for it, or in my case, a waddle, what with my shoes falling off, carting two bags and a toddler. Amy and Lena beat me to the car, then had to stand there waiting because I had the key. We were all soaked to the skin, wetter than we were in the pool, I think!

We had scheduled a visit to a friend in a nearby town next, and the storm continued as we drove. I have never driven in such a downpour! In several places the road was really flooded. In the one below, I had to change into 2nd gear to get through it. And yes, I'm filming and driving, but my new camera is a point-and-click, one-touch video clever thing and I was driving with BOTH hands on the wheel!

It was bloody insane. Rained sideways and that thunder was cracking. Glad I didn't have to drive in it!

Looks like you're having a wonderful vacation!! Well, except for the downpour today. :) We didn't get anything...just a few clouds!