But I only went for two classes, one each.

I really didn't want to go after my unpleasant experiences last time. I signed up for the CPR education session, and after having it demostrated, the instructor told us to come up in pairs to role play saving the legless dummy. I looked round the semi-circle briefly, as everyone did, saw that me and the woman to my left would be up third. I didn't catch her eye, but didn't think much of it.

The first two pairs went, then, just as I was about to stand up with the woman on my left, she and the woman on her left jumped up quickly together, not even looking in my direction once. I sat there quite stunned, as were several of the other mothers, one of whom came to my rescue by promptly organizing all the remaining people into pairs, including me!

Then in the meeting, as I struggled to make myself understood, and tried to apologize for not being able to feed the roosters as we would be in NZ, another mother ridiculed my by parroting my apology (sumi masen), which made me feel so embarrased!

So, not wanting to be exposed to this juvenile behaviour anymore, I was quite reluctant to go, but determined to nonetheless, because Amy and Lena love it so much when I do come, and get so heartbroken if I don't! 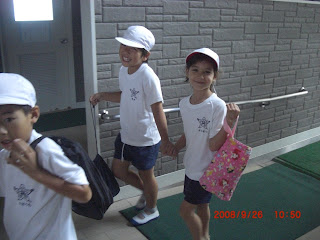 Lena's was first, we all went to the hall to do some stupid games. Okay, Lena loved it - as we were walking home she looked up at me and said "Mum I had so much fun playing games with you in the hall today!" So it was worth it. The first game was passing a hula hoop from one person to the next over your body, without letting go your hands. 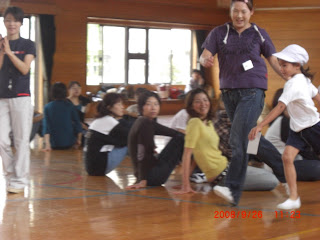 Next was a relay where the kids went in pairs and picked a card with the name of someone's mother. Then they had to find her, and hold hands and run up to a cone and around it and back to the kids again. Only someone had the not-so-bright idea to have us parents turn our backs to the kids. I suppose the idea was to make it more challenging for the kids, but it left the parents with no idea how the game was going, which kids were having a turn, nor what name they were calling out as it was hard to hear their soft little six-year old voices over the racket. They found me pretty fast though, unsurprisingly. They all know me and call out "Lena's mum!" all the time. 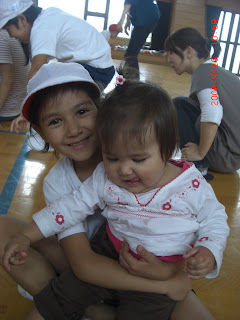 I went home for lunch, and a nap, and came back to Amy's room after 2pm for the final lesson of the day. It was craft time, and they were making paper plates to spin on a stick. Here is Amy with the portrait she drew of Erica for her plate. 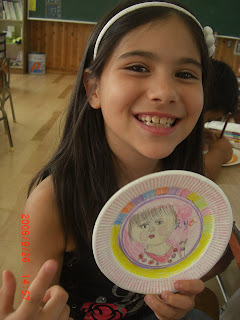 And Erica with her plate. (lots of help from a sad Mummy who noticed that Erica reached for the crayons with her left hand but just could not hold them with that stuck thumb) 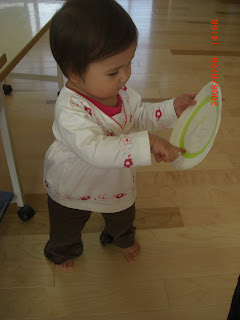 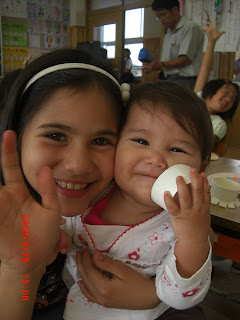 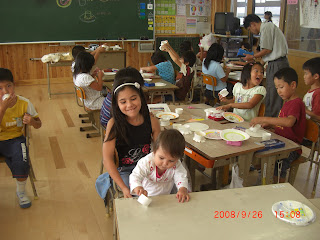