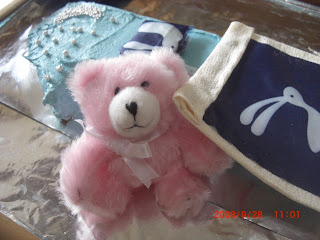 We had a wonderful birthday party for Erica on Sunday! I spent all Saturday preparing, and was so exhausted I spent Monday on my back with a headache, so it was really a three-day affair for me, but I couldn't have my little princess miss out on her special first birthday. Amy's was in a park here, with four other families we knew who had babies. Lena's was in NZ, with no other babies at all, but all four 2-year old cousins, and other assorted relatives and neighbors. I had to give Erica the best I party I could! 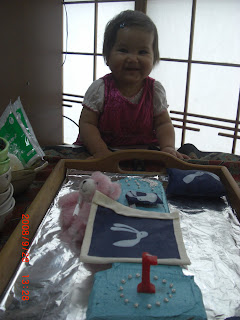 For some reason everyone I know had a baby last year, or so it seems! So we had a robust guest list. One older baby came, 14-month Nao, and there were another five babies younger than Erica - 11-month old Marina, four-month old Kiara, three-month olds Juna and Yuuko and tiny two-month old Miyu! Yuuki, the only boy, born on the same day as Erica, in the same hospital, was unable to make it as his mother had appendicitis! But we still had seven babies in the house, plus five older siblings, seven Mums and four Dads - and us of course. We filled up every available space in our modest two six-tatami-mat rooms! 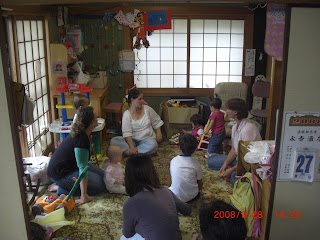 Erica handled it all very well! She curiously greeted each new guest who came to the door, showing off her pretty pink party dress. Until there were so many that she didn't notice the extra arrivals! She was interested in her cake, but didn't wreck it. I started the party with baby foods only on the table - Erica's favorite vegetable soup and bread, jelly, baby cheese, bananas, crackers and Marmite, but she was more interested in the grown-up food that followed - potato chips, 'curls' (kind of like twisties), popcorn, crudites with cream cheese dip, and scones with jam and cream. 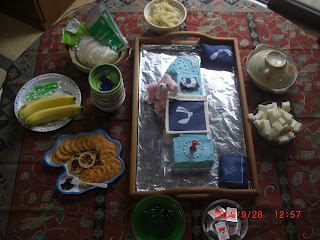 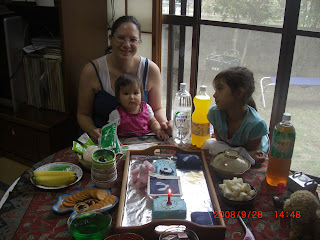 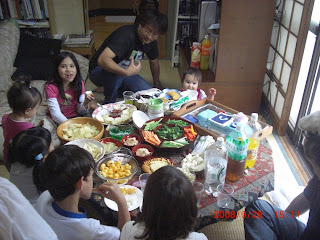 What a fun get together, your darling daughter sure looks like she had a blast, she is so adorably cute!!!!

What a nice party!

Was great party. Hope you are feeling better today - and that cleaning up wasn't too much of a mission :( With that many smallies I imagine you will keep finding bits of cracker and curl for the next week or so. I know Marina was quite intent on mulching as much as she could into the floor! Gomen.

Raining again - would be a perfect day for scone making...

wow, that looks like so much fun! i'm sorry we missed it. :(